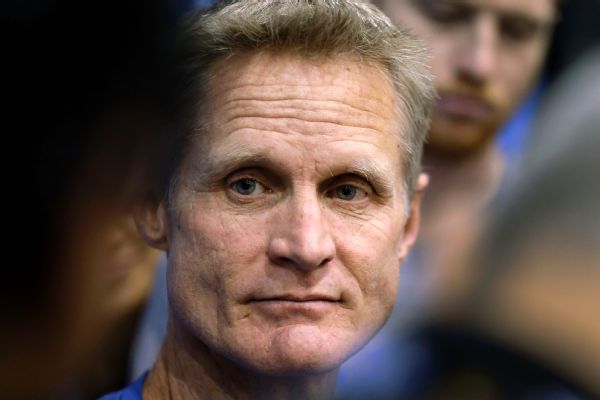 PORTLAND, Ore. --Golden State Warriors coach Steve Kerr on Sunday spoke out against an executive order initiated by President Donald Trump that temporarily bans entry to the U.S. of all refugees and most visitors from seven majority-Muslim countries.

"I would just say that as someone whose family member was a victim of terrorism, having lost my father, if we're trying to combat terrorism by banishing people from coming to this country, by really going against the principles of what our country is about and creating fear, it's the wrong way of going about it," Kerr said after the Warriors defeated the Portland Trail Blazers113-111. "If anything, we could be breeding anger and terror. So I'm completely against what's happening."

Kerr's father, Malcolm, was assassinated in 1984 by an Islamic jihadi while serving as the president of the American University of Beirut, where the Warriors coach was born.

Kerr was a college freshman at Arizona at the time his father was murdered. His unique background has led to his having a diverse group of friends and loved ones. The vetting tactic Trump has instituted hits close to home for Kerr.

There have been incidents of green-card holders being denied permission to board flights returning to the United States. The NBA has reached out to the U.S. State Department to better understand how to handle players who might be affected by Trump's immigration order.

The executive order has caused outrage not just among the American people but also globally. It sparked protests throughout the country and criticism from some governments around the world.

Many believe the country is facing a crisis, and Kerr made it known that he doesn't approve.

"I think it's shocking. It's a horrible idea," Kerr said. "I feel for all the people that are affected. Families are being torn apart, and I worry in the big picture what this means to the security of the world. It's going about it completely opposite. You want to solve terror, you want to solve crime, this is not the way to do it."