Steve Nash: Choice 'made for me' 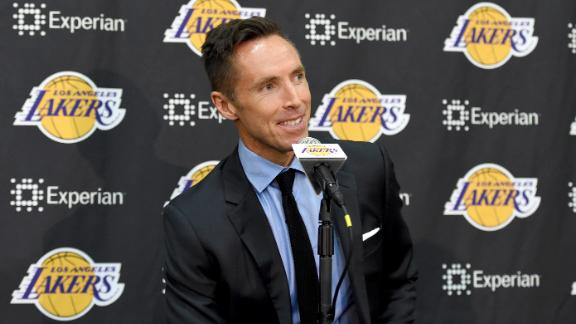 He trained as hard as ever, felt great in training camp and in his first preseason game. Then he woke up the next morning and felt every single one of his 19 seasons in the NBA.

"I really thought I was going to get through the year," Nash said Tuesday at a news conference at the Lakers training facility to announce his retirement from the NBA. "I did everything I possibly could. I think I was in as a good a shape as anybody through training camp. But when I woke up that next morning and was a mess, that's when I really started thinking long and hard of what I'm really capable of this year.

"In the end, it became pretty clear and the decision was sort of made for me. I just wasn't going to be able to sustain it. I wouldn't be able to help the team this year."

Nash said he took about 10 days to think through his options. He met with Lakers general manager Mitch Kupchak, leaned on his family and friends and tried to look honestly and deeply into his soul before deciding if this really was the end. Looking back on it now, he said he probably knew for a while that it was, but he needed to exhaust every possible option before he could be at peace with the decision.

"I think [Lakers trainer] Gary Vitti, who I became close to while I was here, and the doctors probably gave me a nudge and a hint a few times that I pretended to ignore or pretended to miss," Nash said of accepting the reality that his body simply couldn't withstand the rigors of the NBA anymore.

"But I wouldn't feel as clear or in full acceptance of this if I would've backed out at any time before I did."

Nash, 41, officially announced his retirement on Sunday in a letter to fans on the Players Tribune and a "SportsCenter" conversation with ESPN.com's Marc Stein.

But Tuesday's news conference gave him an opportunity to answer questions about his star-crossed three seasons with the Los Angeles and put the entirety of his Hall of Fame career into perspective.

He won two MVP awards, finished as the most accurate free throw shooter in league history and tallied the third most assists of all time. He and former Phoenix Suns coach Mike D'Antoni are widely credited with changing the style of offense played in the NBA during their golden run together between 2004-12.

The two men tried to rekindle some of that magic in Los Angeles in 2012, but it was not to be. Nash broke his leg in a freak play -- a collision with Portland's Damian Lillard -- and was never the same player. The leg injury set off a chain reaction of nerve, back and muscle issues that Nash could never recover from.

He played in just 50 games during the 2012-13 season, which ended in a first-round sweep by the San Antonio Spurs.

The Lakers were without Kobe Bryant in that series after he tore his Achillles tendon. They'd lose Dwight Howard to free agency soon afterwards.

D'Antoni lasted one more season in L.A., but could never fully implement the fast-paced style he and Nash had created in Phoenix. He resigned after last season.

"I came here with huge hopes and dreams and was incredibly excited and humbled to come here and have the opportunity to come here and play for the Lakers," Nash said. "For it just not to be in the cards, it was a failure and a huge disappointment. It's been a difficult period of my career and my life -- just to battle through that and try to make something of it -- which was fruitless in the end. I've never worked harder and never wanted something more, but it just wasn't to be." Nash thanked the Buss family and the entire Lakers organization for their class and professionalism during these difficult three years. He plans to live in Los Angeles and raise his children here.

He also said he understood the negative comments he's heard from fans in Los Angeles after he posted pictures of himself golfing shortly after the Lakers announced in October that he would miss the entire season.

Nash and the Lakers both understood at that point he had likely played his last NBA game, but mutually decided to "back away" from the situation instead of announcing anything. It would give him space to deal with the sadness, stress and anxiety he felt at saying goodbye to the game. And it would give the Lakers an opportunity to use his contract in a trade that would help their team, which Nash said, "seemed like the right thing to do."

"I get it. Fans don't know the whole picture," Nash said. "And I get that they're passionate, especially online. There's a bit of a pack mentality. I'm sure we all feel bad for our kids that they're going to grow up in that world.

"I don't really have a problem with that. I'm not saying it's like, awesome, but in playing professional basketball for 18 years you've faced your fair share of criticism no matter how much success that you've had."

While the final three seasons of his career did not go as he had hoped, Nash said the time away has helped him to find perspective on the entirety of his NBA career.

"There was a lot of disappointment not to win a championship in my career, but at the same time I definitely left it all out there and had a tremendous career," he said. "There's been some great players who haven't won a title. They probably feel similar to the way I do. Disappointed that that final step wasn't to be. But my time playing this game has been incredible. I played on some great teams. I had a lot of success and just wasn't able to get over the hump a few times."

All of those times were during his days with the Suns. In a way, it felt strange to see him retiring as a Laker since his final playoff heartbreak came in the 2010 Western Conference Finals against Los Angeles. D'Antoni said in 2012 that he never should have left Nash and the Suns to take over as coach of the New York Knicks. Nash echoed that sentiment on Tuesday.

"When you're knocking on the door in this league, it's so hard because the stakes get raised so much. There's so much expectations. There's so much criticism for not getting over the hump, that sometimes we're a little hasty in our decisions," Nash said. "Not just Mike or the reasons Mike left, but the personnel moves. Instead of keeping a core together, you maybe see if you can skip a step or a level by making a move. That's part of what makes this business so hard, is sometimes the pressure surrounding the situation than it is the actual ideology of the franchise. I think we were a championship caliber team and we might have had a shot or two at it if we'd have stuck together.

"But we clawed our way back in 2010 and had a shot at it against a terrific Lakers team. At the start of that season I think we were picked like 13th in the West. So taking it to the wire was a great season in the context of things, but disappointing in that we got really close."

Those playoff heartbreaks will be a part of Nash's legacy. But just a small part. His impact on the NBA and in starting what's become a golden age for Canadian basketball players is immeasurable.

"I simply want people to remember me as a competitor and a great teammate," Nash said.

Nash 'Disappointed' About Never Winning Title
Steve Nash reflects upon his 19-year NBA career, in which he won the MVP award twice, and how he wants to be remembered.

Steve Nash On Decision To Retire
Two-time NBA MVP Steve Nash discusses his time with the Lakers, legacy questions, and his decision to retire. 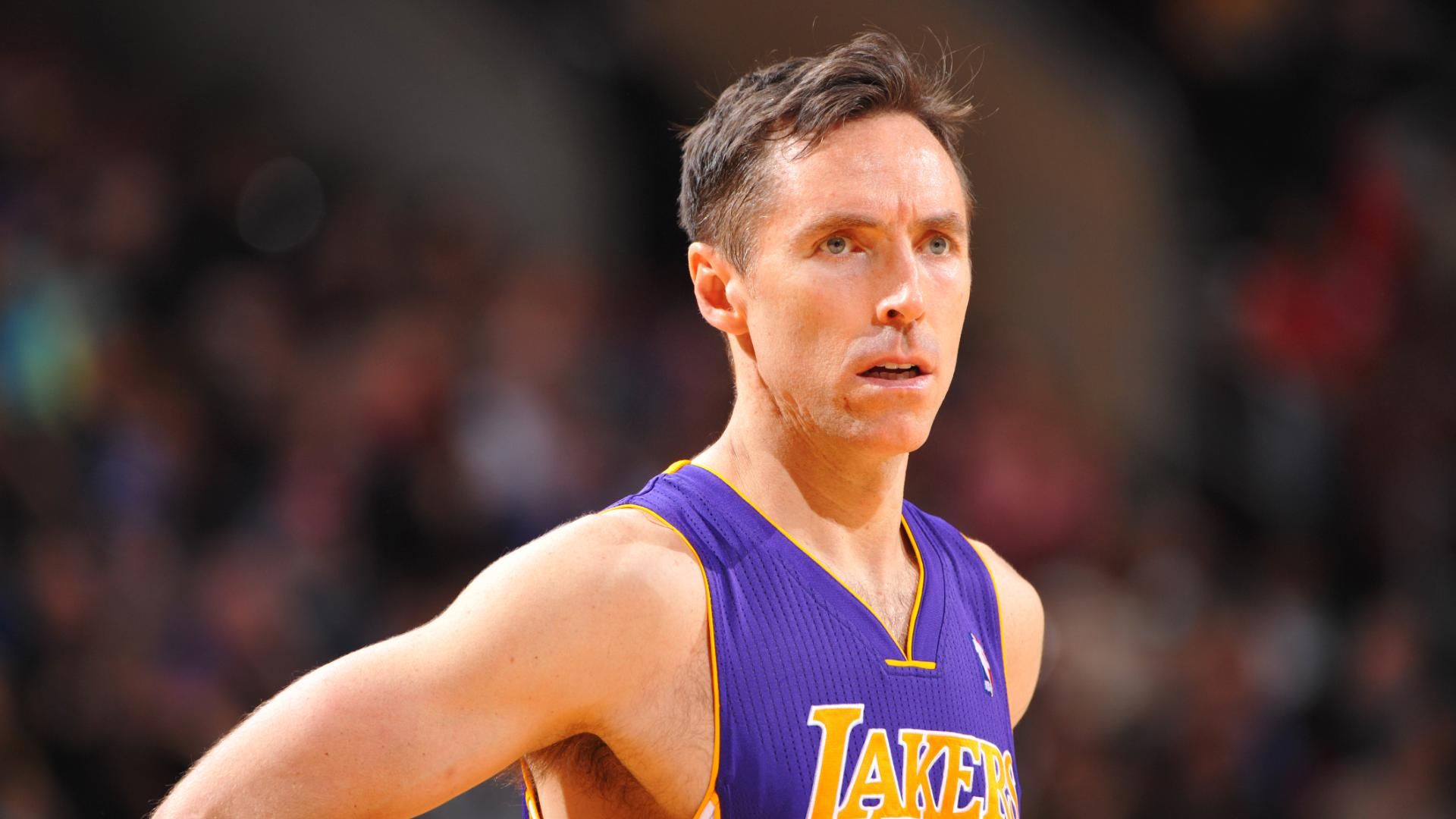