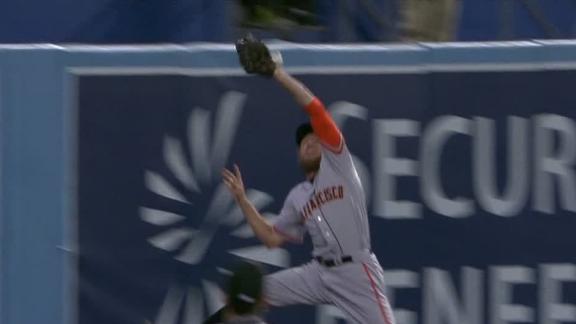 The confrontation started when Bumgarner fielded a ground ball by Yasiel Puig and fired to first for the third out in the seventh inning of the Dodgers'2-1 win in Los Angeles.

Bumgarner emphatically shouted, apparently celebrating the final out. But it appeared Puig thought Bumgarner was shouting at him, which led the two to exchange words and the benches to clear.

No punches were thrown, but each side traded several pushes and shoves.

Monday continued a tradition of sorts between Bumgarner and Puig. It was at least the third time they have exchanged heated words on the field, though it was the first known instance since September 2014.

In May 2014, after Puig hit a 431-foot home run to center field and flipped his bat, Bumgarner took exception and waited for Puig as he rounded third base before the two exchanged pleasantries as tempers flared.

Four months later, on Sept. 23, 2014, Puig made a move toward the mound after he was hit by a Bumgarner pitch. More words were exchanged before the benches cleared and bullpens emptied, and Puig had to be held back by an umpire and several teammates.

Bumgarner didn't return for the eighth inning Monday. He limited the Dodgers to one hit with no walks and 10 strikeouts in seven shutout innings. With his second-inning double, Puig stood as the only Dodger to reach base against Bumgarner.

Puig said he thought Bumgarner might have been reacting in anger to the fact that the only hit he had given up was to him.

"Every time I face him, it seems like we have those problems," Puig said. "It seems to work out because we win."

Puig said he wasn't sure whether Bumgarner had something personal against him.

Bumgarner appeared to still be annoyed after the game.

"I didn't hear what was going on,'' he said. "I just got him out, and he tried to stare me down or something. That's what it looked like to me."

"It's good that we won, partly because of that," first basemanAdrian Gonzalezsaid of the bench-clearing incident in a postgame interview on the Dodgers' broadcast after he lined a game-winning double to right field in the ninthinning. "[Puig] was just playing baseball. He didn't do anything. That's something that Madison's got to do a better job of -- just getting into the dugout."

Giants manager Bruce Bochy had his back turned and was retreating down the dugout steps when the fracas broke out.

"They're not going to go out to dinner," he said. "It's been going on for a while, so it doesn't surprise me anymore."

Information from ESPN Stats & Information and The Associated Press was used in this report.

Bumgarner and Puig separated on the field
After Yasiel Puig gets out on a soft grounder, he has words with Madison Bumgarner, and the two need to be separated, which causes the benches to clear.