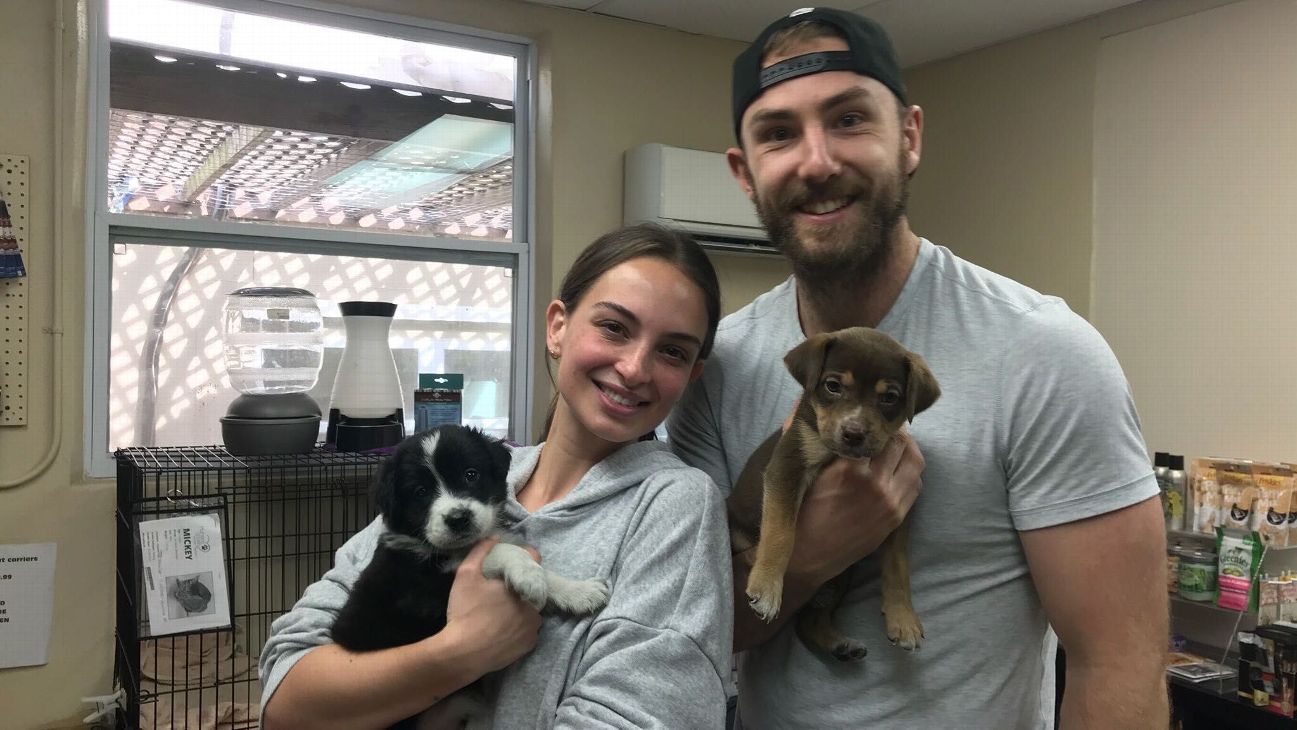 Barclay Goodrow was traded from the San Jose Sharks to the Tampa Bay Lightning on Feb. 24. Seventeen days into his tenure with his new team, the NHL shut downbecause of the coronavirus outbreak.

Goodrow had just settled into his condo with his girlfriend, Madison. They could have gone back home to Toronto, but Goodrow was wary of traveling during a pandemic.

"Going through an airport when we didn't need to isn't something we wanted to do," the 27-year-old forward said. So they stayed in Florida.

"We were watching the news one night and they said shelters were pretty much at capacity with animals," Goodrow said. "And a lot of shelters were being shut down."

The couple had both grown up with dogs and always wanted one of their own; being bound to their apartment in a new city for an indefinite period felt like as good an opportunity as any to fulfill that desire.

So they applied to foster two puppies from the Humane Society of Tampa Bay.

"We showed up to pick up our two dogs, and as we went into the room, [Victor] Hedman and his wife were sitting there to pick up their two dogs, as well," Goodrow said. "It was a total coincidence, but we were getting four dogs from the same litter."

Once the Humane Society of Tampa began posting photos of Goodrow and Hedman and their 6-week-old foster puppies -- believed to be collie-retriever mixes -- teammate Braydon Coburn became interested. Coburn's family came in the next day, and they're fostering the puppies' three other siblings because they didn't want to separate them.

"They're calling it the Lightning litter," Hedman said. "At this point, we want to come closer to a solution for the virus, obviously follow the rules as much as we can and be positive as much as we can. But having these puppies at home with us really helps time move faster."

Said Goodrow: "When you're stuck inside a pretty small apartment, the days can go by pretty slowly. These two guys have provided a lot of excitement. And something to do. They definitely help lighten the mood. It's a joy. They're probably sick of walking three times a day, but there's nothing else to do."

NHL players, like the rest of us, are homebound for the foreseeable future. Without morning skates, team meetings, travel and games to fill their days, many have adopted dogs to give them companionship during this uncertain time.

"Everyone is getting a dog right now," Vancouver Canucks forward Brock Boeser said. "It's the perfect time to get a dog."

Boeser already had Coolie, an Australian Cattle mix he -- coincidentally -- adopted in Tampa Bay during the NHL All-Star Weekend in 2018. Boeser wanted to adopt another dog last summer, "but I had too much going on," he said. Right before Boeser was set to make the 27-hour drive from Vancouver to Minnesota after the NHL's coronavirus pause, he spotted a dog available for adoption online. Boeser applied, got accepted and upon returning to Minnesota, Coolie had a little brother, Milo, who Boeser believes is either a lab-shepherd mix or a husky-shepherd mix.

"I feel like it's easier right now to train him because I'm at home the whole day, I can't leave," Boeser said. "I let him out every two hours, so he's only had a few accidents in the house. I have him sleep in the kennel at night from 12 to 7, then I let him out and let him sleep with me the rest of the morning. He's been a beauty so far."

Blue Jackets defenseman Scott Harrington is quarantined in his Columbus apartment with his girlfriend, Maddie.

"About a week in, once we realized we were going to be here for a while, we decided to get a dog," Harrington said. "It wasn't a situation where it was like, 'Oh my god, we're so bored we need something to entertain ourselves.' We were probably going to get a dog this summer, but we saw this pause as a good opportunity to do it earlier. It's been a bonus that she keeps us busy."

"I think we spend 99 percent of the day just watching her, waiting for her to go to the bathroom in the house and try to catch her before it happens," Harrington said. "I have to say, she's been a great addition to our house, especially since we don't have much to do. She always wants to be around us, she sleeps on top of my girlfriend's head, it's cute."

Raising a dog with social-distancing guidelines isn't easy. Harrington ordered dog food online that was supposed to arrive within 48 to 72 hours, but instead took a week and a half. Luckily, Harrington's teammate, Pierre-Luc Dubois, also has a French bulldog, and Maddie happened to dogsit for Dubois when the Blue Jackets were on a road trip earlier this season.

"So we had a bunch of leftover food at our apartment for the same breed, which held us over until our shipment came," Harrington said.

Even though Victor Hedman, Goodrow and Coburn live in the same city and are fostering the same family of dogs, they haven't seen each other since the adoption.

"We're pretty strict about our stay-at-home business," Hedman said. "We haven't ventured out too much. I've seen some of my neighbors, talking from a safe distance, but that's it. We have a fenced-in backyard, so [the dogs] can run around, so there's no need for us to go on unnecessary hikes."

Hedman and his wife, Sanna, already had a bulldog named Harry. They always wanted to foster or adopt another dog, but it's already difficult arranging for one dog to travel internationally to their native Sweden every offseason. Plus, if they got a new dog in season, Hedman knows his wife would take on a brunt of the work, thanks to his travel schedule.

"We saw fostering these puppies for three weeks as a great opportunity for us to help out how we could," Hedman said. "You form a relationship with them, and hopefully then can go to a good home after."

"We've wanted a dog, but obviously, our busy schedules didn't permit," Wilson said. "And then we saw Halle on a shelter's Instagram one day, and we figured this might be the best time, heading into summer."

Wilson said raising a puppy while still playing was "hard" and "a lot of work." When he was on a road trip, and Taylor was away for a day, teammate Michal Kempny's girlfriend, Nicola, watched Halle for a day. "It helps having teammates, and when you have a cute puppy, people are usually happy to help." (Halle did pee on Kempny's couch, which Wilson said was "the only casualty.")

The transition to stay-at-home parent was also a struggle.

"We went from wanting to spend as much time with her as possible to having to make sure we put her in her pen or crate so she doesn't get too attached, or develop doggie anxiety when she's away from us," Wilson said.

The toughest part for Wilson now is that Halle has all of her shots and is at the age when she should be socializing.

"It's time for her to be at the park and meeting other dogs, so that sucks for her a little bit," Wilson said. "We have the Dowds [teammateNic Dowdand his wife, Paige] come over with their golden in the backyard and we let them play. So it's good she realizes there's other furry animals out there, it's not just me and Taylor."

Halle is already so popular on the internet, the Capitals have arranged to sell bobbleheads featuring her and Wilson (with a portion of the proceeds benefiting Wolf Trap Animal Rescue, from which Halle was adopted).

Meanwhile, in Tampa Bay, Goodrow is getting used to life as a temporary puppy dad.

"They're high-energy, they eat well and they're constantly growing," Goodrow says. "Then as soon as 10 [p.m.] hits, they don't want to go to bed. They're up every hour wanting to pee. When you're a 4-pound dog, you don't have the biggest bladder. There's been a lot of sleepless nights for sure."