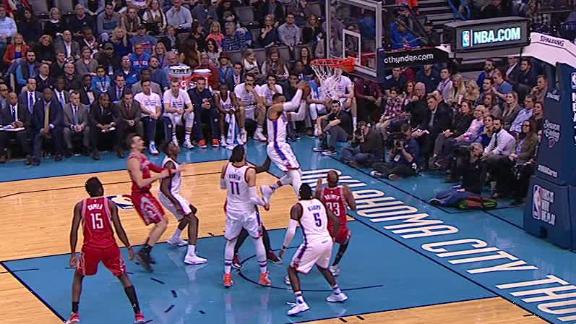 OKLAHOMA CITY -- With a rebound midway through the fourth quarter, Russell Westbrook notched his seventh consecutive triple-double, the longest such streak since Michael Jordanhad seven in a row in 1989.

But as one streak continued, another ended, as the Houston Rocketswon 102-99 to snap the Oklahoma City Thunder's six-game winning streak. Westbrook finished with 27 points, 10 rebounds and 10 assists and sparked a 13-point comeback, but the Thunder fell short, with Westbrook and Anthony Morrow both airballing potential go-ahead 3-pointers in the final 30 seconds.

Afterward, Westbrook was in no mood to discuss the achievement, flashing only a cold glare coupled with awkward silence when he was asked about it.

Westbrook got deep into the paint twice in the closing minutes with a chance to put the Thunder ahead but missed two left-handed layups. He also set up Victor Oladipo on a three-on-two fast break with 29 seconds left, but Oladipo was unable to finish the layup.

After picking up the triple-double, his 12th of the season and 49th of his career, Westbrook didn't have another rebound or assist for the final 7:41 of the game. He did score 12 of the Thunder's final 18 points.

Westbrook was just 8-of-25 from the floor and turned it over eight times while being hounded by nemesis Patrick Beverley, although hewas unwilling to credit Beverley's defense on him.

"I missed a lot of easy shots, man. Honestly, brother," Westbrook said. "I haven't made no shots in the last month. S---, so, just gotta get my mind right."

Beverley, though, had no problem praising Westbrook.

According to research by ESPN Stats & Information, Westbrook is now 4-of-27 in his career on potential go-ahead shots in the final 10 seconds of the fourth quarter and overtime. He has missed 10 of his past 11 such attempts.

The Thunder are now 9-3 this season when Westbrook has a triple-double, with the three losses coming by a combined nine points.

Westbrook is one of only four players to register at least seven consecutive triple-doubles, joining Jordan, Oscar Robertson and Wilt Chamberlain. He can pass Jordan on Sunday against the Boston Celticsand move within one of the longest streak ever, set by Chamberlain in 1968.