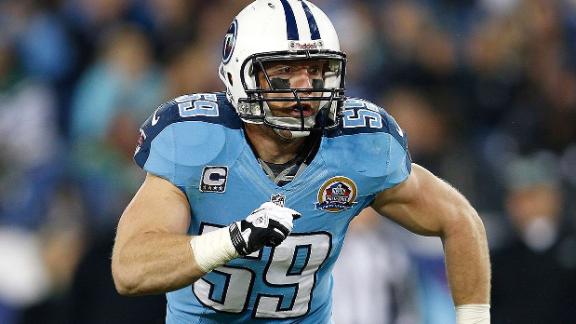 NASHVILLE, Tenn. -- Former Tennessee Titans linebacker and special teamer Tim Shaw revealed Tuesday in a video on the team's website that he has ALS.

"A year ago, I was playing NFL football," Shaw, 30, said in the short video. "I've recently been diagnosed with ALS. I'm here today to stand up and fight with all of you against this disease."

Shaw then poured a bucket of ice water on himself as part of the Ice Bucket Challenge, the social media phenomenon that is drawing awareness and donations for research of amyotrophic lateral sclerosis, also known as Lou Gehrig's disease.

Indianapolis Colts quarterback Matt Hasselbeck, who spent the 2011 and '12 seasons with the Titans, tweeted his praise for Shaw.

Sometimes you have a teammate that gets a small amount of credit but makes you & your team better in every way. That describes @TShawsTruth.

- Matthew Hasselbeck (@Hasselbeck) August 20, 2014Shaw was a fifth-round pick by the Carolina Panthers in 2007 out of Penn State. He spent one season each with the Panthers, Jaguars and Bears before joining the Titans in 2010.

After getting cut by the Titans before the 2013 season, Shaw announced his retirement from football earlier this year.