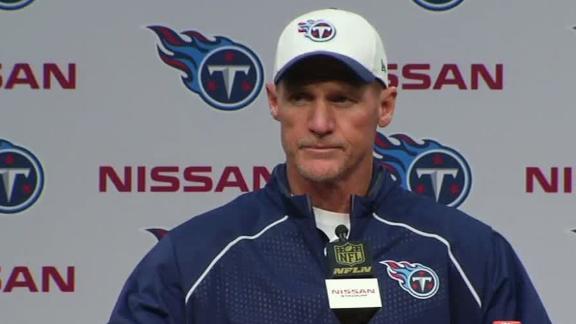 "I think it was B.S.," Whisenhunt said after Tennessee's 38-10 loss to Miami. "That's not the way you play football. I think it was done with the idea of trying to hurt our quarterback, and that's bulls--- football."

Mariota didn't leave the game, but he was clearly hobbled and wore a left knee brace for the remainder of the game, in which he lost two fumbles and threw two interceptions. He will have an MRI exam Monday, a league source told ESPN's Adam Schefter.

The rookie quarterback said Vernon approached him after the game to apologize for the play, which drew a roughing the passer flag.

"I don't think it was malicious," Mariota said.

Vernon acknowledged that he wanted to see video replay of the hit but emphasized that he is not "a dirty player."

"I know one thing -- it wasn't intentional," Vernon said. "I've never been a dirty player in my whole career. ... Nobody tries to get personal fouls. I know one thing, they are expensive."

Mariota said he expects to be a full-go for Wednesday's practice as the Titans prepare for next week's home game against Atlanta. He was sacked five times Sunday, raising his season total to 19.