Tony Romo: No pain in back 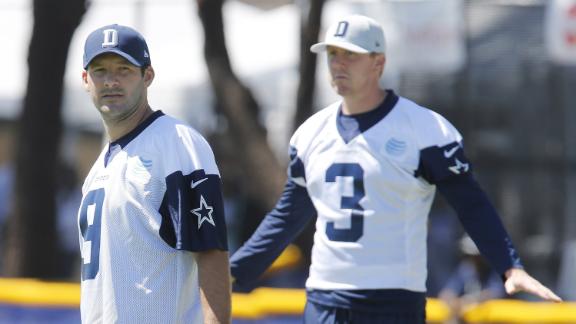 OXNARD, Calif. -- Tony Romo turned 34 in April and is coming off his second back surgery in less than a year, but the Dallas Cowboys quarterback sees himself playing the best football of his career in 2014 and beyond.

"I feel personally like I've just started to come into the player that wanted to be six, seven years ago," Romo said after the Cowboys' first training camp practice Thursday. "I think -- and I've said it before -- but I think over the course of the next four or five years, you'll see the best version of me that I've had throughout my career. That's for a lot of different reasons. But I really believe that, and I believe that will show as we go forward. So I'm excited about that. As my body continues to get healthier and healthier, it's going to be better."

Romo, who is entering his eighth full season as the Cowboys' starter, would not go into those reasons, but he did address the current state of his back. He had a discectomy last December that kept him out of the Cowboys' Week 17 loss to the Philadelphia Eagles. He was held out of competitive drills in organized team activities and minicamp to make sure he was 100 percent for training camp.

Romo said he will spend three to four hours a day doing rehab, maintenance or strengthening exercises for his back. He said there is no pain in it.

"They'll definitely get sick and tired of me over here in the training room and just all the areas around the facility here because you're going to want to get inflammation and all that stuff," Romo said. "If anyone's ever had surgery, you have to do all those things. A back, any time you've ever had a back, the smart people change the routine going forward. They make sure that they commit to a routine that's going to give them the best chance to be strong in all the other areas you need to be.

"Part of that is doing all the little work, the tedious stuff, before you get out here. It's two, two and a half hours you've got to get up here before you start the practice. That's what I have to do, and I have no problem doing that. I love the game, and it's going to be something that's easy to do to make sure that you're always in good health."

Romo was limited in Thursday's practice in part because coach Jason Garrett did not run any offense-vs.-defense drills in order to work the players into the grind of camp slowly. Romo took one snap in passing drills. He threw a handful of individual routes, and those were only to Dez Bryant, Jason Witten or Terrance Williams.

He followed a similar protocol to what he did in the spring.

"I could have went through all of them. But without going against the defense, I felt like, 'Let's be smart,'" Romo said. "Talking with the trainers and coaches and coming up with a plan. There was a certain number we were going to throw, and I was able to hit that before I got through it. I was like, 'I could keep going but we have this process going in and we're going to stick with it.' I'll be picky during the team reps when we get against the defense in the next day or two."

The Cowboys will not have the offense work against the defense until Saturday. They will protect Romo as much as possible before the preseason games start, but he will be hit and how he reacts will go a long way toward determining if his better days are truly ahead of him.