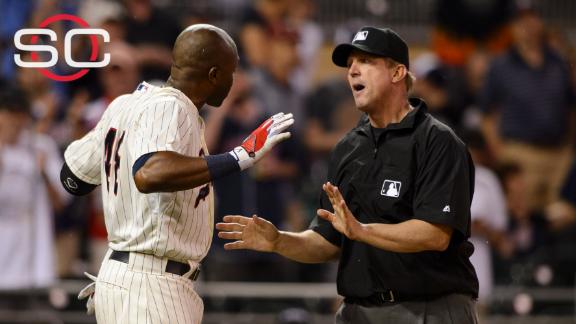 Hunter has appealed the suspension, calling it a "little harsh," and is in the lineup Friday for the Twins' game against the Texas Rangers, batting second and playing right field.

"I didn't expect two games," Hunter said. "I got ejected, so I knew something was going to come down."

Hunter was thrown out of Wednesday night's game for arguing a called third strike late in the Twins' loss to the Royals, became animated and needed to be briefly restrained in the aftermath.Hunter yanked off his elbow pad, shin guard and batting gloves and threw them toward the batter's box after the ejection.He also ripped off his jersey and tossed that over the first-base line before retreating to the dugout.

He talked about his emotions after the game and said that even umpires have bad days.

"I'm a passionate guy. This is my job, and I come to do my job well," Hunter said Friday. "And I expect you to do your job as well."

The Twins lost that game 7-2, ending a 1-5 homestand that dropped them out of the American League Central lead.

Hunter said he wasn't sure when the appeal would be heard.

"I have no idea. I've never appealed. I've always accepted my punishment," he said. "I understand the punishment now, but I just think it's a little harsh right now."