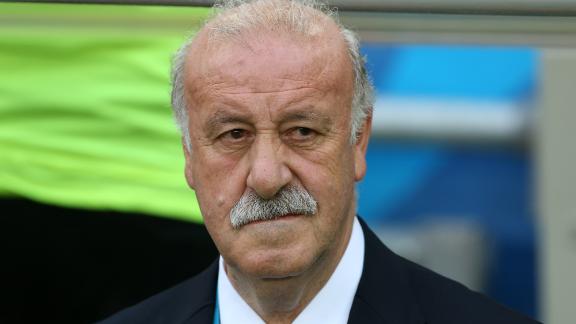 Vicente del Bosque said on Friday he will remain Spain coach despite a nightmare World Cup.

Spain were eliminated even before playing their third group stage game after defeats the the Netherlands and Chile, but the 63-year-old manager said he and the Spanish Football Federation have agreed he will continue.

"I have been in contact with the Federation in this time of reflection and they've decided that the last six years say more than two bad games," he told Spanish media in quotes translated by the Guardian. "The Federation are feeling strong at the moment and they value the work I have done.

"We are feeling strong again and we are going to continue our work, in the same way we always have."

Del Bosque's contract expires after the 2016 European Championships in France.

The coach chose to focus on the successes Spain have enjoyed since he took over in 2008 -- winning the World Cup in 2010 and the Euros in 2012, while insisting la Roja are not in need of any major changes.

"We don't need to have a drastic revolution, we need to go in the same direction while making some small changes," he said. "We can do much better and get on the right track again. We're going to try and defend our title at the next European Championships."

Del Bosque to remain with Spain
Vicente Del Bosque will continue as manager of Spain until his contract expires after the European Championship in 2016.

Biggest flop: Spain
The ESPN FC crew discusses Spain's treacherous World Cup, and who is to blame for their poor showing.