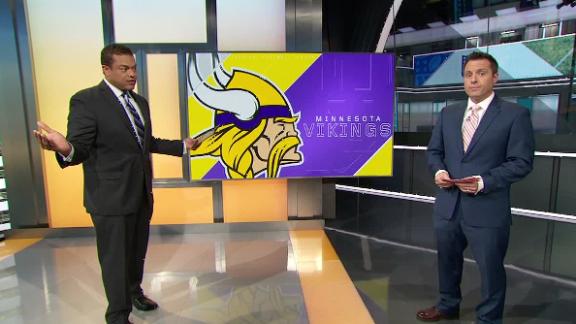 ESPN
By Ben Goessling
MINNEAPOLIS -- Shaun Hill will be the starting quarterback for the Minnesota Vikings in Sunday's regular-season opener against the Tennessee Titans, sources confirmed to ESPN on Saturday.

Hill has been given the start over Sam Bradford, for whom the Vikings traded a 2017 first-round pick and a conditional 2018 fourth-rounder to the Philadelphia Eagles last week. Bradford joined the team after Teddy Bridgewater tore multiple ligaments in his knee Aug. 30.

The team split first-team snaps between Hill and Bradford during practice this week, but it appeared the Vikings were leaning toward Hill, who has been in Minnesota since 2015 and has a more thorough understanding of the offense than Bradford.

"Shaun has run every third-down play we have in our package since two years ago, so not only the play going in, the speed of the third-down situation, the play getting called, lining up, the defense giving you [different looks]," offensive coordinator Norv Turner said Friday. "Tennessee is a multiple-look defense; they give you a lot of different looks. So there [are] a lot of things that are being processed that Shaun has been doing for two years and Sam has been doing for four days."

Coaches praised the way Bradford picked things up during the week, and he is widely expected to be the Vikings' starting quarterback in the near future.

Hill's last start in a season opener came in 2014 with the Rams against the Vikings. He began the season as the starting quarterback after Bradford tore his ACL and faced the Vikings in Zimmer's first regular-season game as coach. Hill strained his quadriceps in that game, a 34-6 Vikings win.

On Sunday, Hill, Zimmer and Bradford will all be back together in Nashville.

Titans coach Mike Mularkey said this week that he expected Bradford to start, based on what the Vikings gave up to get him, but added that the Titans' preparation wouldn't change much no matter who starts.

"It is a challenge, [but] not like it's going to be where there's two completely different styles," Mularkey said. "That's one thing. I mean, really, their specialty is pocket passing. They can get out of the pocket. We've got video of them with the designed out-of-the-pocket [plays], but that's not what they're there for. They're there to first hand it to [Adrian Peterson] and then second, off action like that, try to get balls down the field. It's not an extreme difference with what we're doing this week, to be honest with you."