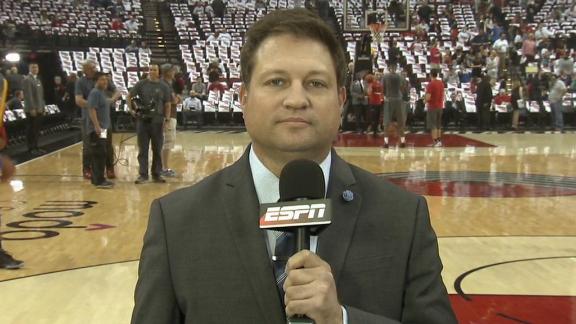 Kerr told reporters prior to Monday's Game 4 that Curry would be active as long as everything went OK during pregame warmups.Moments later, the star guard did not appear to be hampered by the right knee sprain he sustained in Game 4 of the first-round series againstHouston.

The Warriors announced his availability a short time later. Kerr would not say whether Curry would start.

Kerr had previously described Curry's status as "doubtful" on Sunday and then upgraded that status to "questionable" at Monday morning shootaround.

Curry had been out since he sprained his right MCL after slipping on a wet spot of the Toyota Center floor in the Warriors' Game 4 win over the Rockets. He had previously missed Games 2 and 3 over that series after spraining his right ankle in Game 1.

Curry was officially listed as active just after he began his standard pregame warmup routine, which begins with dribbling drills and moves along to shooting from around the floor. Curry went on to complete that routine, with no apparent incident.

When asked how the decision to make Curry active was ultimately reached, Kerr said, "talking with Steph, talking with our medical people, and talking with [Warriors general manager] Bob [Myers]. That was the process.

Kerr was asked whether Curry will be on a minutes restriction, a possibility the coach indicated on Monday morning. Kerr communicated that there's no hard and fast limit, though they will monitor Curry's conditioning.

"He's not really under a minutes restrictions from the training staff," Kerr said. "It's more about what he can handle conditioning-wise. So we'll see what that means. We really have to kind of do it on the fly. And I would kind of guess that he would play in shorter bursts, but if he's rolling, then we'll probably let him go for a little while." Kerr said Curry did not influence this decision through lobbying.

"There was no campaigning," Kerr said. "We've been talking every day, so it's just a matter of today being the day that looks like he's ready to go. But, again, we'll see how he comes out of his pregame workout and go from there."