Why the Maple Leafs should hire Kyle Dubas as GM, and why the Islanders could be a good fit for Lou Lamoriello 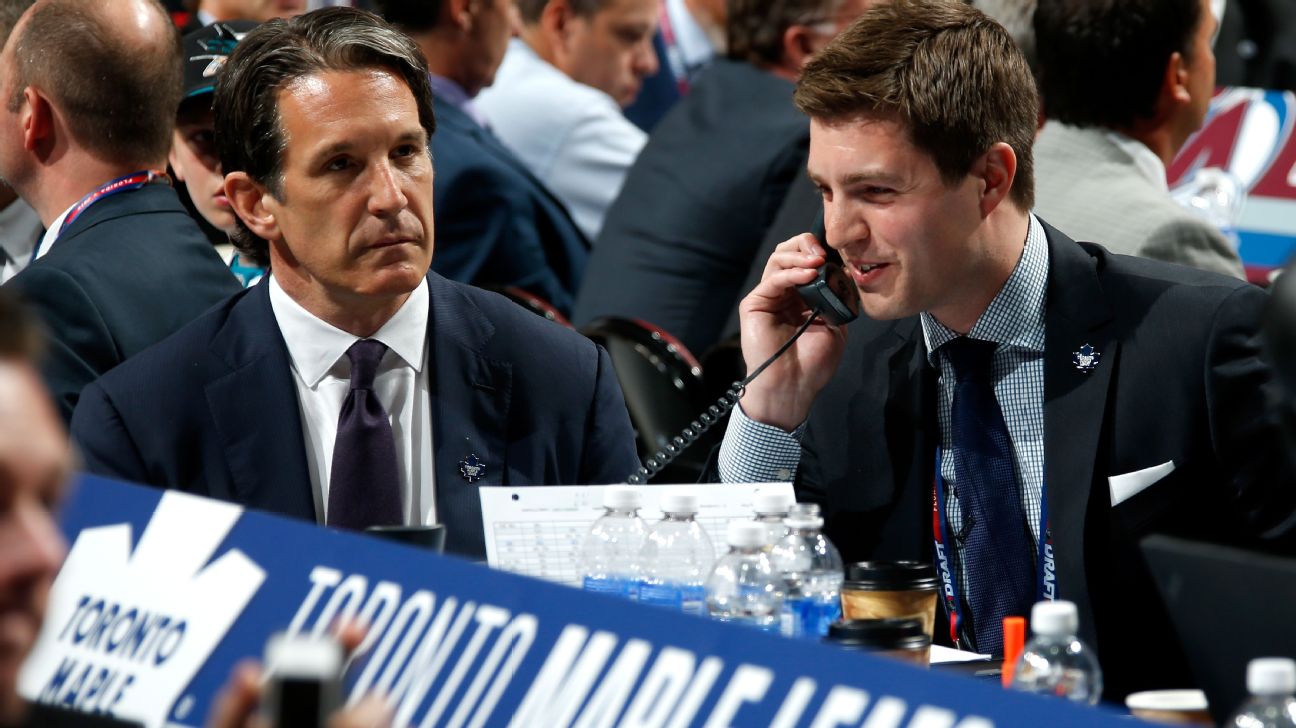 The Toronto Maple Leafs announced on Monday that they will not bring back Lou Lamoriello as general manager for the 2018-19 season. Lamoriello, who won three Stanley Cups with the New Jersey Devils, was inducted into the Hockey Hall of Fame in 2009. Maple Leafs president Brendan Shanahan said Lamoriello, 75, would transition to a senior adviser role. Our writers weigh in on what Toronto, and Lamoriello, should do next.

Who should be the Maple Leafs' next general manager?

Emily Kaplan, national NHL reporter:Kyle Dubas has been tabbed as a rising star in hockey circles for some time. You can understand why he has a reputation as a whiz kid. At 28, Dubas was hired by Shanahanto become the Maple Leafs assistant general manager. He jumped right from junior hockey; Dubas was previously the GM of the Sault Ste. Marie Greyhounds, where he began working at age 14 (really) as a hockey operations assistant, and before that as a dressing room attendant.

Dubas was the youngest person ever to be certified by the NHLPA as an agent. In Toronto, Dubas' area of focus had been the AHL Marlies and player development for Toronto. Last year, The Colorado Avalanche asked, then received, permission to talk to Dubas about a front-office position. The Avalanche were reportedly smitten. The Maple Leafs, who had signed Dubas to a new two-year deal months earlier, then blocked the move. That signaled that Toronto had higher aspirations for Dubas within its own organization. Well, it's time to make good on that and see what impact Dubas can make with more say.

Greg Wyshynski, senior writer:Dubas is a young fellow who has tremendous upside, and if he doesn't become the general manager of the Maple Leafs, it's going to be his fault. Those aren't my words, those are the (paraphrased) words of Lou Lamoriello back in 2015 about Dubas, the 31-year-old wunderkind currently serving as assistant GM for Toronto. The forward-thinking Dubas has earned his stripes under Lamoriello and has learned from one of the best. Is he the safe choice? No. That would be Mark Hunter, his elder and the team's other assistant GM. But to quote John Tortorella: Safe is death. Dubas is life for the Leafs.

Chris Peters, NHL prospects writer: I have a hard time seeing anyone other than Dubas being the GM at this point. I don't think the Maple Leafs would have made the Lamoriello move without having a good idea which of their two assistant GMs was going to take over for him. There may be a few attractive, experienced general managers out there, but the Maple Leafs had seemingly been grooming Dubas for this position with his handling of the Marlies. As much as having a smart evaluator like Hunter in the mix would make a lot of sense, Dubas brings a unique perspective. While Dubas has been working in hockey since he was a kid, he has a bit of an outsider's viewpoint and isn't beholden to the "This is how it has always been done" theory. When you have someone like that in a central decision-making role, surrounded by hockey lifers like Shanahan and Maple Leafs coach Mike Babcock, and even Lamoriello in an advisory role, you have an interesting dynamic. As long as the Maple Leafs let the young exec breathe and do the job, I think he could be a positive influence on the organization.

What should Lou Lamoriello do next?

Wyshynski: I've followed Lou's career since he joined the New Jersey Devils in the late 1980s and was the architect of three Stanley Cup championship teams in the span of eight years. The idea that he would settle for "senior adviser" and anything less than "ruler of all he surveys" is hard to contemplate, which is why there has been rampant speculation that he could be headed to any number of franchises that could use that magic Lou dust. But I'd rather him stay in Toronto as part of this brain trust that he helped create. This season's playoff setback being what it was, the Leafs are headed in the right direction. If they do win the Stanley Cup in the next few seasons, Lamoriello should earn a ring as an ever-present force in the front office, even if Dubas has the helm.

Kaplan: At 75, Lamoriello should do anything that fulfills him. He has earned that right. Lamoriello might not be fulfilled in Toronto with somebody else running the show. After all, he never appeared fully comfortable after he turned the GM job over to Ray Shero but stuck around in New Jersey. I propose something drastic -- a popular rumor among internet folks who like to connect their own dots. Lamoriello should run the New York Islanders. (The dots: Lamoriello has a good relationship with GM Garth Snow, and Lamoriello's son, Chris, has worked as Snow's assistant GM since August 2016.) The Islanders are at a critical juncture. They are almost ready to contend and have a ton of talent but still have a few big issues to sort out: retain John Tavares, build a defense, acquire a legitimate goaltender. It's one last project for Lamoriello to stamp his legacy on.

Peters: That's a really intriguing idea, Emily. Lamoriello is one of hockey's most interesting figures, and I don't think the game has passed him by at all. He might hold on to some archaic ideas and practices, but by and large, he's a smart executive who still commands a great deal of respect in the league. He says at this point that his plan is to honor his contract with the Maple Leafs, but I don't think that would be something that he finds all that thrilling. So I'm going to offer something a little crazy: The Carolina Hurricanes should hire him to be the GM. I don't know if they could afford him, but considering that he is leaving the Maple Leafs' GM post with the team in much better shape than he entered it in, it's worth considering. Tom Dundon wants to turn the Canes into a winner? Lamoriello is a proven winner and could help change the culture, though I'd imagine that would be a very short-term marriage in the end.
Report a correction or typo
Related topics:
sportsespnlou lamoriellokyle dubas brendan shanahannhlgmcarolina hurricanesgeneral managerstanley cup playoffsplayoffstoronto maple leafsnew york islanders
Copyright © 2022 ESPN Internet Ventures. All rights reserved.
TOP STORIES
Man accused of killing 9-year-old in Durham on trial in federal court
NC abortion legal battle looms amid standoff between AG and GOP
Why you should pay down your credit cards right now
FDA advisers recommend updated COVID booster shots for fall
Fort Bragg soldiers reunite with families after deployment
Fourth of July 2022 will cost families more this year
NC GOP unveils state budget; House backs Medicaid expansion path
Show More
2 Raleigh women shot while on business in California
Workers fired for not joining company's daily Christian prayer: EEOC
ACC changing scheduling model for football in '23 and beyond
Witness: Trump grabbed steering wheel, demanded to go to Capitol
Sheetz announces limited-time discount on gas ahead of July 4 holiday
More TOP STORIES News