WTVD
WINSTON-SALEM, N.C. (WTVD) -- Nobody in college basketball attacks the rim quite like freshman sensation Zion Williamson does. His Duke teammates started doing it in the second half, and suddenly the top-ranked Blue Devils had yet another blowout victory.

Williamson scored a season-high 30 points with 10 rebounds, and Duke won its first road game of the season by beating Wake Forest 87-65 on Tuesday night.

RJ Barrett finished with 21 points and matched a season high with seven assists, and Cameron Reddish added 10 points during his best game in a month, helping the Blue Devils (13-0, 2-0 Atlantic Coast Conference) win their eighth in a row.

The high-flying Williamson was 13 of 16 from the field with three 3-pointers - he entered with four all season - in surpassing the 28 points he scored in his debut against No. 2 Kentucky. While he was 3 of 4 from 3-point range, his teammates were a combined 4 of 19. 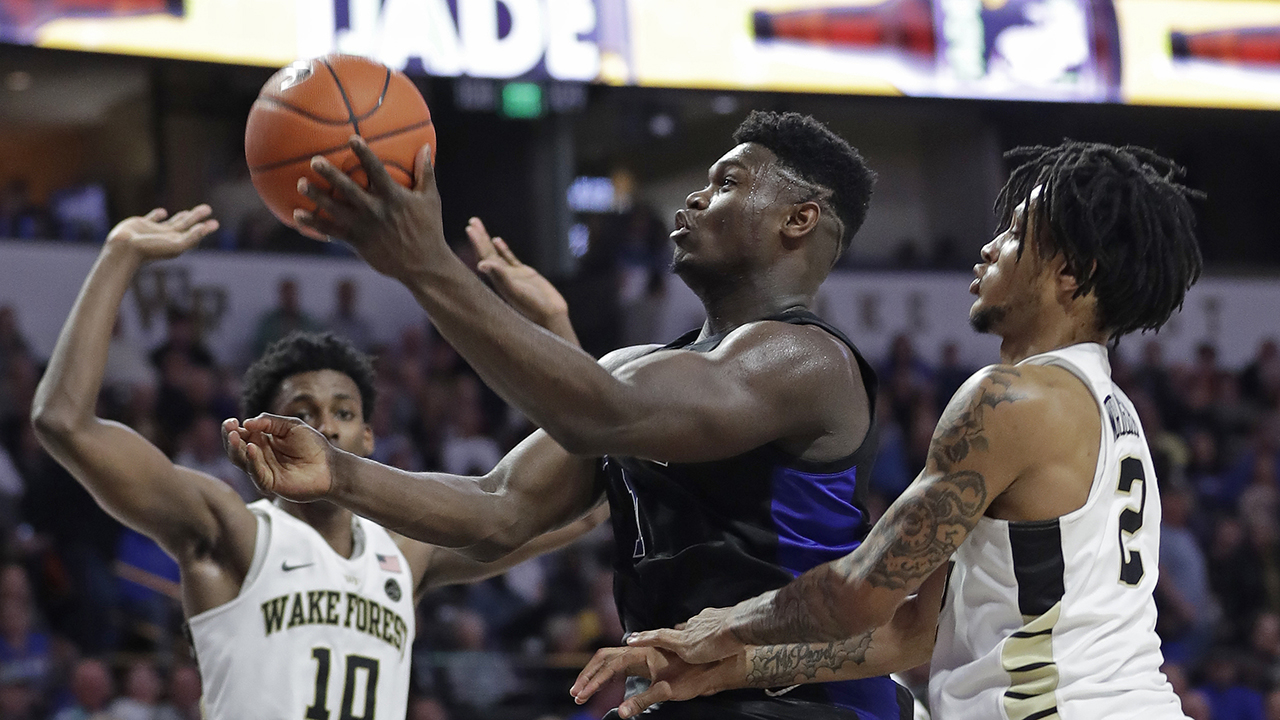 "Coach is always telling me to shoot the ball, and at first I was like, if it's not falling, I'm really not going to shoot it," Williamson said. "Even when I miss, they say, 'Keep shooting. You can make it.' ... Even after I shot one over the rim, they were like, 'Z, shoot another one,' and I got it right back and made it. I think my confidence shooting 3s is getting a lot better."

Duke pulled away in the second half, outscoring Wake Forest 45-31 and shooting 63 percent in the final 20 minutes while making 17 of 22 shots from inside the 3-point arc. The Blue Devils finished with 13 blocked shots while having none of theirs rejected and outscored Wake Forest 58-22 in the paint.

"Any time we rebounded defensively, we had a fast break," Duke coach Mike Krzyzewski said. "So there was going to be stuff in the lane, and when we didn't (rebound on defense), they got second shots. When we get our transition going, we're better. We're just better. That's an integral part of our game."

The Blue Devils took command when they began driving to the basket with a vengeance, hitting five consecutive layups to start the second half to push their lead into double figures for good. The margin grew from there, with Barrett stretching it into the 20s with a 3 with about 11 minutes left.

Freshman forward Jaylen Hoard scored 13 points, and Sharone Wright Jr. and Brandon Childress had 12 apiece for the Demon Deacons (7-7, 0-2), who have lost three of four to fall to .500 for the first time since November.

Duke: There might have been a concern about how the highly touted freshmen would handle their first game on an opponent's home floor - especially considering the Blue Devils had lost six of their last nine ACC road openers. Nothing to worry about in this one, but tougher tests are coming.

Wake Forest: The Demon Deacons haven't been able to get over the hump against the best teams on their schedule. They've lost nine straight against Top 25 opponents and have dropped 25 of 26 against ranked teams, with the lone victory an upset of No. 8 Louisville in March 2017. And they're a combined 0-14 against rivals Duke and North Carolina under fifth-year coach Danny Manning.

"Disappointed to lose. That's always the mindset, but you've got to dig yourself out of it," Manning said. "It's the best league in college basketball. This is the league we signed up for."

Duke had 24 assists on 36 baskets, while Wake Forest had just six on its 22 buckets. . The Blue Devils put up 15 3-pointers in the first half (making five) but took just eight in the second half (making two). . Reddish was in double figures for the first time since he scored 10 points against Yale on Dec. 8. . Marques Bolden added 12 points for Duke.

"'You're a bad guy because you haven't done it,' or 'We're not as good because we haven't done that yet.' Ludicrous, really. . When I see stuff like that, come on. It cheapens that person's . knowledge of the game. Come on, man. We come up with a top-10 schedule every year." - Krzyzewski, when asked about not playing a true road game until now.