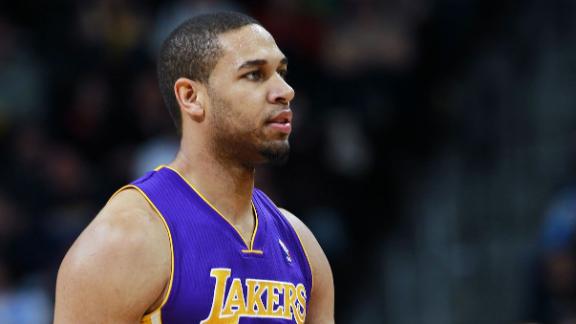 The Lakers experimented a bit with their roster last season by bringing in several former lottery picks on one-year deals in hopes of realizing the potential they showed leading up to the draft, and Henry panned out.

He averaged career highs in points (10.0), rebounds (2.7), assists (1.2), steals (1.0) and minutes (21.1) per game -- all while shooting a career-best 41.7 percent from the field in 43 games (making five starts) -- before having his season cut short because of a torn ligament in his left wrist, and a bone bruise and abnormality of the meniscus in his right knee.

Henry underwent a pair of surgeries to correct both injuries, and he rehabbed in Los Angeles with the Lakers' training staff this offseason before being offered the new deal.

Henry will bring the Lakers' roster size to 11 once all of the Lakers' free-agent additions are officially signed. General manager Mitch Kupchak said earlier in the summer that he expected the team to carry 13 players next season.

Also, the Lakers waived back-up point guard Kendall Marshall on Friday, according to a league source. Marshall averaged 8.0 points and 8.8 assists in 54 games for the Lakers last season -- including 45 starts -- after being called up from the D-League in September. He had struggled in the summer league in the past week, however, averaging 8.3 points on 31.4 percent shooting and 3.0 assists against 2.8 turnovers in four games. Marshall had a non-guaranteed deal with the Lakers worth just under $1 million for next season.