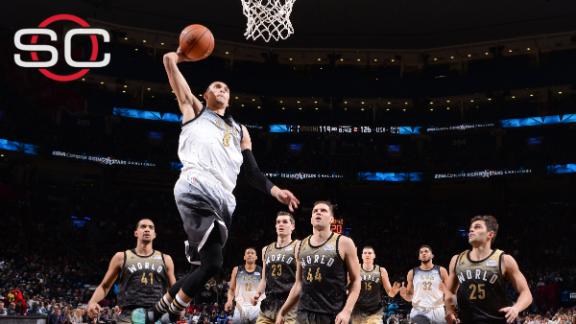 TORONTO -- Zach LaVine hoisted the MVP trophy above his head, laughing along with Minnesota Timberwolves teammates Andrew Wiggins and Karl-Anthony Towns as he stood on the podium.

One win down at All-Star Weekend. One to go.

LaVine had 30 points and seven rebounds and the United States team beat the World team 157-154 in the BBVA Compass Rising Stars Challenge on Friday night on the opening night of All-Star festivities.

In the game featuring some of the best rookies and sophomores in the league, LaVine geared up to defend his slam dunk title on Saturday night by making 13 of 20 shots to beat Wiggins, who took home MVP honors last year in Brooklyn.

"I'm excited for tomorrow," said LaVine, who revived interest in the dunk contest with an electrifying performance last year. "I'm ready to put on a show."

Kristaps Porzingis scored 30 points, and Emmanuel Mudiay had 30 points and 10 assists for the World team. Wiggins scored 29 points while playing in front of his hometown fans.

The Rising Stars game can sometimes take on the feel of a sideshow, something that forces the next generation into a spotlight that they aren't always ready for. But the court was loaded with talent on Friday night in Toronto, players like Wiggins, Porzingis, Towns, Elfrid Payton and Jabari Parker.

The influx of talent has given several long-suffering franchises -- the Timberwolves, Knicks, Bucks -- hope that better days are arriving soon.

For most fans in attendance, Wiggins was the star attraction. He has been churning out highlight reels since he was 14 years old, was drafted No. 1 overall last season and won the rookie of the year award. The locals have called him "Maple Jordan" and openly pine for him to one day come home and play for the Raptors.

"It felt great," Wiggins said. "I got to play in front of a lot of people I haven't seen in a long time. My family, friends got to watch it. It was great being back home and playing in front of my hometown."

Wiggins has stated time and again that he loves it in Minnesota and envisions a long and bright future with Towns, LaVine and the rest of the Timberwolves' promising young core. But he has never shied away from his love of Toronto and he said he was looking forward to being back in Canada for an extended stretch this weekend while the rest of the basketball world finally trained its focus on his hometown.

Wiggins received a thunderous ovation upon introduction in the starting lineup and was serenaded with chants of "M-V-P! M-V-P!" late in the game.

"He's a rock star in his hometown," LaVine said.

For as much time as the 20-year-old Wiggins has spent in the spotlight in his young life, he is remarkably disinterested in attention. He threw down a few big dunks early in the game -- one off of a backboard pass from Mudiay -- to get the crowd on its feet, but was also happy to let his teammates get in on the action until a late flurry that got the World team back in it.

Porzingis, the Latvian who captivated the Big Apple and helped revive the Knicks, hit 5 of 8 3-pointers and threw down an alley-oop midway through the second half. And Mudiay, the Nuggets rookie who has struggled with his shot this season, hit 5 of 10 from deep.

And Wiggins wasn't mad at all that LaVine walked out of the arena with the MVP trophy.

"I got it last year, he got it this year," Wiggins said. "(Towns) is going to get it next year. We're going back-to-back-to-back. That's the plan."