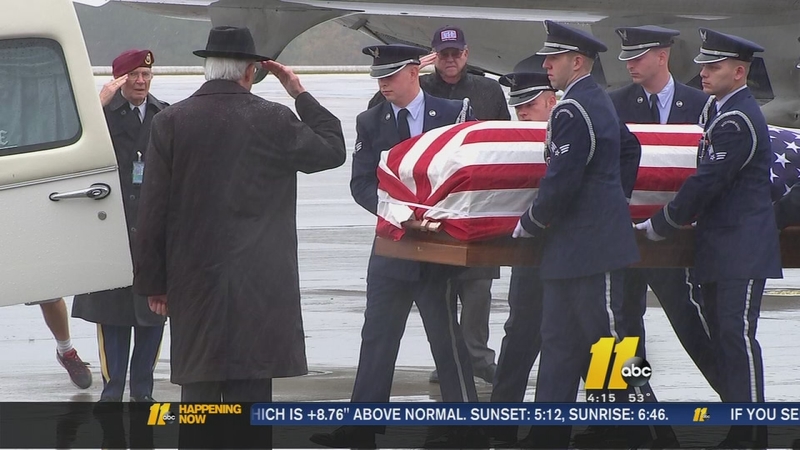 LILLINGTON, NC (WTVD) -- It was a bittersweet homecoming at Raleigh-Durham International Airport Monday as the remains of Staff Sgt. Donald Stewart came home from Vietnam nearly 50 years after a plane crash took his life and the lives of 84 others.

Stewart's flag-draped coffin was met at the plane by an honor guard.

"I waited 50 years for this," said Stewart's widow Wandra Raynor.

The 28-year-old was killed on December 11, 1965 when his Air Force transport plane hit a jungle ridge in fog. There were 81 Vietnamese soldiers and three other Air Force personnel on board.

Fourteen years later, what was thought to be Stewart and the remains of the other crew members were buried at Arlington National Cemetery. But it turned out the remains were not his.

Then in 2007, Raynor and Stewart's daughter Donna - who was not yet born when her dad died - travelled to Vietnam and with the help of locals found parts of the aircraft deep in the jungle.

How did she find the plane?

"By the grace of God! I don't know, but we found it in the jungle," said Raynor.

DNA tests later confirmed that some of the human bones found at the site were Stewart's.

Now that the testing is complete, Stewart - originally from Harnett County - will be buried in his hometown of Coats. His family says it is grateful to finally have him home.

"Much rather have Donald back here than on a mountainside in Vietnam. So it's a big day for us. It's a big day," said his brother Robert.

Robert Stewart said his brother planned to study at Campbell University after the war. Instead, he became Harnett County's first casualty of the Vietnam War.

"He was a paratrooper in the Army, and after his discharge he went into the Air Force, in a unit at Pope Air Force Base and so was I. His unit was called out to duty during the Cuban crisis. At that time he was a pre-pharmacy student at Campbell University," said Robert Stewart.

After Stewart's coffin was placed in a waiting hearse Monday, more than 300 motorcyclists escorted it from RDU to Lillington.

The Stewart family will be the grand marshals at the Harnett County Veterans Day Parade on Wednesday and then at 3 p.m. Stewart will be laid to rest at the Coats Baptist Church with full military honors.

Wandra Raynor's story is nothing short of amazing.