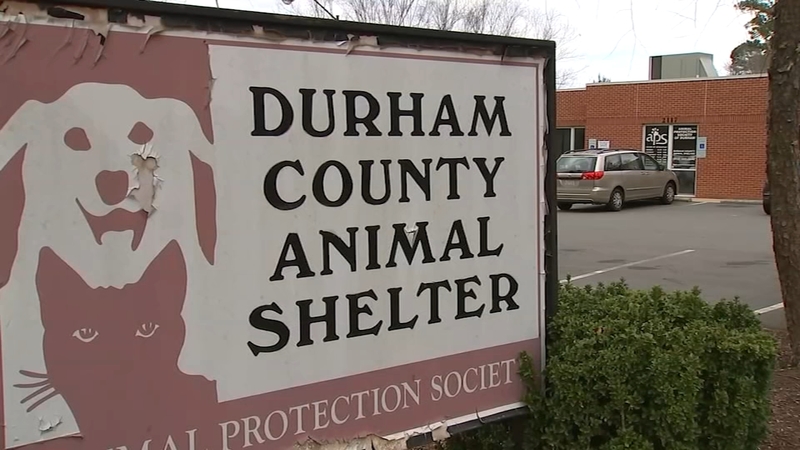 Search on for 2 people after puppy stolen from Durham shelter

DURHAM, N.C. (WTVD) -- The Durham County Sheriff's Office has released pictures of two persons of interest in the case of a stolen puppy from the Animal Protection Society of Durham.

Detectives say they would like to speak to the two men caught on surveillance.

Authorities said that about 5 pm on Wednesday, one man entered the Animal Protection Society of Durham's shelter and walked around the facility several times looking at the animals then left the building. It wasn't until the next morning that shelter staff noticed a 7-week-old German Shepherd Boxer mix puppy named Lazuli was missing from her litter.

"At that time, we played back all the footage from the previous day," said Shafonda Allen, APS of Durham Executive Director. "And we saw that she was taken from our kennel and someone went out a volunteer door and slid her through a security gate."

Security footage shows Lazuli was passed to a person outside the security gate. Allen and her staff are also concerned because Lazuli and her littermates were just spayed or neutered the day before she was taken.

"They are healthy puppies, but they are puppies and they were still getting pain medication," Allen said. "And, we would have given, you know, instructions on care to whoever adopted her. So, with her being younger with her being recently spayed and not knowing the people who took her we are very concerned."

Allen said it is very unusual to have an animal stolen from the shelter and she hopes Lazuli is returned so she can be properly adopted.

"If anyone wants to adopt an animal please speak to the people at the animal shelter," Allen said. "There's really no reason to take an animal. All shelters are looking for homes. So if you have a legitimate desire to adopt and do a good thing with an animal, the best thing to do is to go through the adoption process."

Lazuli is microchipped and local vets have been notified to be on the lookout for the puppy.