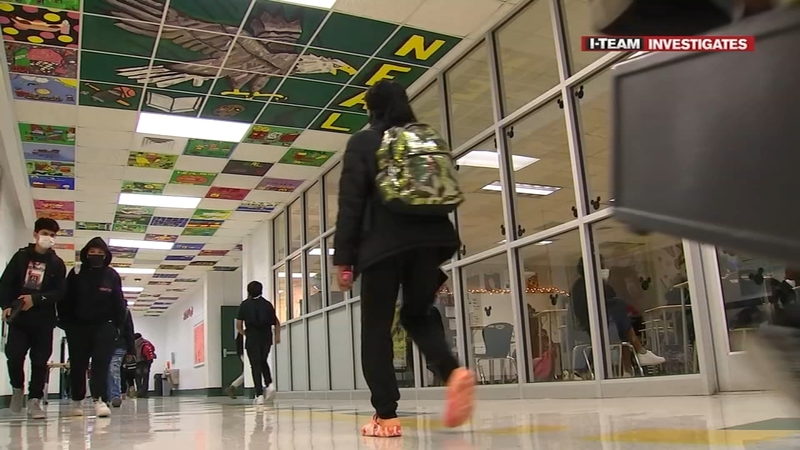 "It's just overwhelming for the kids to handle this," Michael Fuga, Principal at Neal Middle School in Durham, told ABC11. "They're not feeling welcome in a place like school because it's just different now. They're reaching out to this gap of how we get to where things used to be."

As principal, Fuga is also a member of the "crisis team" that responds to tips submitted to the Say Something Anonymous Reporting System, a program now available to hundreds of thousands of students at 98 of North Carolina's 115 public school districts -- and counting.

"The tips before COVID, I would say the first few were about a kid might have a knife or something," Fuga explained, and he added that the calls are coming more frequently and are predominantly about bullying, depression and suicide. "If you think about our eighth-graders, the last year they were fully in-person was fifth grade. We're asking them to be high school students next year and they've never had a chance to be middle-school students."

The anonymous reporting system empowers students, educators and administrators to recognize signs and signals of individuals who may be at risk of hurting themselves or others and anonymously report this information through an app, website or 24/7 Crisis Center Hotline. Those tips all flow to a team of highly trained counselors at Say Something's national office in Miami and among crisis counselors now working from home, where they receive and respond to tips in real-time.

First introduced in North Carolina in 2019, Say Something is the flagship program of Sandy Hook Promise, the organization founded by the grieving parents from the 2012 massacre in Newtown, Connecticut.

"I am very sad. It's not easy to say I think things are going to get worse when my entire organization is focused on making things better," Nicole Hockley, whose son Dylan, of blessed memory, was among the victims. "The tips are still there but the percentage of Life Safety Tips has increased and we are still seeing the increasing amount of kids who are self-reporting."

Life Safety Tips, according to Hockley, is an urgent tip designation where counselors consider at least one life is in imminent danger. Since March 2020, the rate of Life Safety Tips among all the tips coming from North Carolina students has surged 77%.

Like North Carolina, other regions using Say Something are reporting similar trends or worse, including in New York City Area (78% surge in the rate of Life Safety Tips since March 2020), Houston (89%), San Francisco Bay Area (89%), and Pennsylvania (162%), the only other state besides NC to deploy the system statewide.

Indeed, the massacre at Sandy Hook remains anomalous for its death toll and the age of its victims - 20 young children and six teachers - but apart from that, it is just one among a long, notorious list of school shootings in the United States.

It's also a list that continues to grow after a 15-year-old gunman killed four people at Oxford High School in Michigan.

"The fact is guns are the leading cause of death for kids under 19," Mark Barden, the co-founder of Sandy Hook Promise, told ABC11. "And guns are the second leading cause in suicide -- and that's almost always completed with firearms."

Barden's son, Daniel, was another victim at Sandy Hook. Mark now travels across the country lobbying for both state and federal legislators to enforce stricter measures on storing guns and mandating suicide awareness training in schools.

"People need to know the importance of this," Barden insisted. "And if you identify as a responsible gun owner, then this is in your repertoire that your gun needs to be safely stored from minors and prohibited persons or anyone who can use it impulsively and cause a disaster."

According to the Gun Violence Archive, 2021 has already emerged as the deadliest year for gun violence ever recorded, including 59 school shootings. An I-Team analysis of the Center for Homeland Defense and Security's K-12 School Shooting Database, moreover, shows an equally staggering 153 incidents since August 1st where someone either fired a gun, flashed a gun, or a bullet hit school property - more than 2020-2021, 2019-2020 and the 2018-2019 school years.

In North Carolina, the 10 such incidents are more than the last two school years combined.