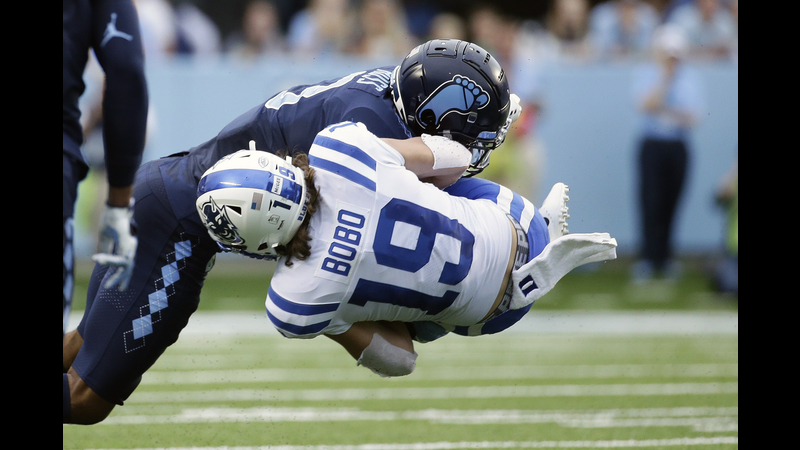 The Blue Devils (4-4, 2-3 Atlantic Coast Conference) had pushed from their own 6-yard line inside the UNC 5-yard line on a dramatic late-game drive. But Jackson's attempted jump-pass after a handoff was snagged by Surratt, the quarterback-turned-linebacker who had leapt to deflect the ball but instead ended up corralling it for a game-saving takeaway.

The Tar Heels (4-4, 3-2) took a knee to end the game, then had their players sprinting off the sideline and across the field to reclaim the Victory Bell presented to the rivalry game winner.

Surratt's interception capped a tense final 7 minutes, which saw the Tar Heels take the lead on Noah Ruggles' 40-yard field goal only to commit a costly turnover as they were on the brink of taking a two-possession lead.

Javonte Williams ran for 111 yards for UNC, leading a ground game that had to carry the load with freshman quarterback Sam Howell under steady pressure and struggling to consistently connect downfield. But after Howell hit Dazz Newsome on a fourth-down conversion inside Duke's 5-yard line, Williams lost a fumble on a carry up the middle with 2:55 left to set up the Blue Devils' final drive.

Duke: The Blue Devils did a lot of things well enough to win, namely by pressuring Howell and frequently collapsing the pocket to keep him on the move and increasing the degree of difficulty on his throws. Howell completed just 10 passes (though they went for 227 yards and two scores) while the Blue Devils picked him off twice before getting Williams' late fumble for a third takeaway. Yet Duke committed three turnovers of its own, the last ensuring the Blue Devils wouldn't claim a fourth straight win in the series.

UNC: Once again, the team that has turned seemingly every late-game scenario into Oscar-worthy drama had another fight to the finish. The good news for the Tar Heels is that it probably prepared them to handle this moment, even if they survived with only a couple of yards to spare. It marked UNC's seventh game in eight outings this year decided by six or fewer points, with each being decided in the final 80 seconds.

Duke: The Blue Devils are off next weekend before hosting No. 8 Notre Dame on Nov. 9.