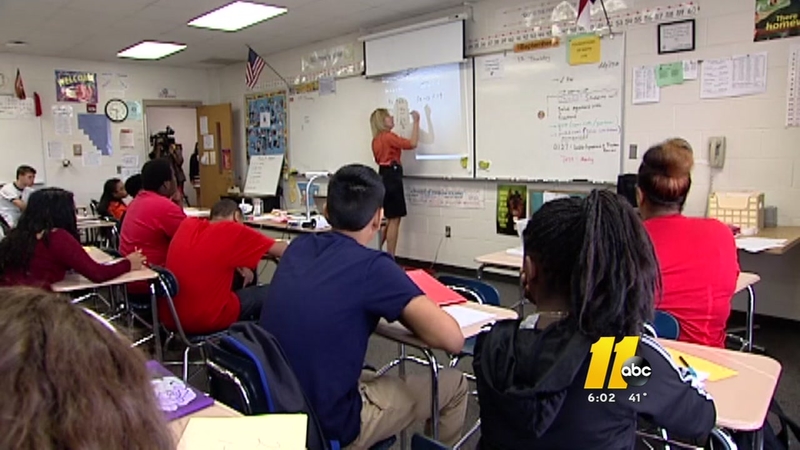 For the first time, the average yearly salary for a North Carolina teacher is more than $50,000 and lawmakers are hoping to see the average pay increase a few more thousand dollars in the next two years.

Recently released figures from the state Department of Public Instruction show the average salary for a North Carolina public school teacher at $51,214 this school year.

The WakeEd Partnership is a non-profit that serves roughly 11,000 teachers in Wake County.

In the past five years, the average teacher salary has increased 12 percent, from $45,737.

“This is an important threshold to cross” - @wakeedpa. The average teacher salary is up and has hit more than $50K. Ed advocates are still concerned, though, it’s not enough to keep teachers in North Carolina classrooms. #ABC11 pic.twitter.com/RJ8IwgdteN

Vice President of Policy Tim Lavallee said the pay raise is an important threshold to cross for teachers.

"It's encouraging that we're heading in the right direction as far as North Carolina teaching salaries are concerned," said Lavallee. "Ideally, what WakeEd would like to see is actually valuing the profession based on the requirements for entry and for professional development and continuing education."

The money was approved in a two-year plan and the hope is it'll keep teachers in North Carolina classrooms.

"North Carolina continues to make progress in its efforts to pay our teachers more, and average teacher pay above $50,000 is an important benchmark. As state superintendent, I am committed to working with the General Assembly to continue increasing educators' salaries," said North Carolina Superintendent Mark Johnson.

Republican lawmakers said their goal is to raise average teacher salaries to $55,000 a year by 2020.

The average salary for teachers includes local supplements to the state base salary.

This year, the average local supplement was $4,337.