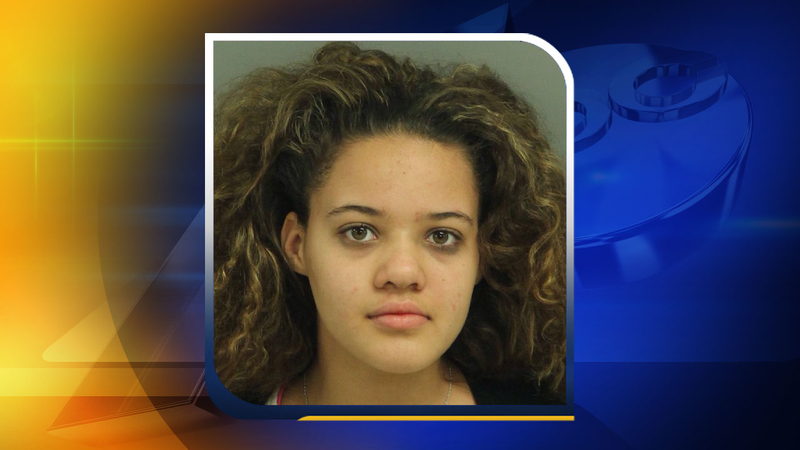 RALEIGH -- A 17-year-old driver faces multiple charges after a police chase and crash that began with her driving the wrong way down Interstate 540 Monday morning.

North Carolina Highway Patrol officers spotted her going the wrong way in the median of 540 near the Six Forks exit and pulled her over.

When an officer got her information and went back to his cruiser to check it out, Alexis Lewis allegedly took off and fled down Six Forks - hitting the pursuing trooper's cruiser twice in the process.

Raleigh police are also charging her with hitting two vehicles on Longstreet where it meets Six Forks. One of those drivers told ABC11 she just backed up and drove off.

She then turned on Lynn Road and as she approached a stopped school bus loading children in the distance, Lewis' mother says the trooper rammed her car in the side to prevent it from getting to the bus.

"She would have probably killed those children or hit the bus, I'm not sure which, but she was going at a high speed of 65. So the, the state trooper, rammed into the side to keep her from hitting that bus or those children where the vehicle flipped," said Jennifer Lee.

Lewis then overturned the black Lexus SUV stolen from her mother in the front yard of a home on Lynn Road.

Trooper: girl hit his car twice & hit 2 other drivers as he chased her down Six Forks. She overturned on Lynn Rd. pic.twitter.com/GbwHz6XNRk

Lee said her daughter is a "problem child" and called the officers who stopped her "heroic".

The teen made her first court appearance Monday after being released from the hospital for the minor injuries she received in the crash.

The Sanderson High School sophomore faces a laundry list of charges including felony speeding to elude, driving without a license, and assault on a law enforcement officer.

According to court records, Lewis has been arrested five time since March.