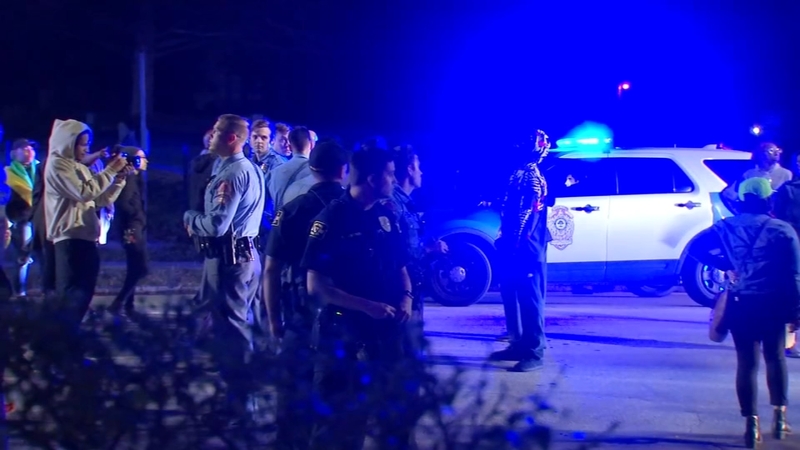 On Wednesday afternoon, police said 26-year-old Javier Torres has been charged with altering/removing a gun serial number, going armed to the terror of the public, and resist, delay, and obstruct.

According to a release from the department Tuesday evening, Torres was shot by police Tuesday around 6:45 p.m. on N. Rogers Lane near the Edgewater Place shopping center.

According to police, Torres ignored repeated warnings to stop and to drop his gun.

Torres was shot once in the abdomen and taken to WakeMed.

As protocol, J.E. Byrd, the officer that shot Torres, has since been put on administrative leave as the NC State Bureau of Investigation investigates the incident. Byrd has been with the Raleigh Police Department

Radio traffic released by Raleigh Police on Wednesday gave some insight into the tense moments before and after shots were fired.
EMBED More News Videos

A judge approved the release of body cam and dash cam footage from a shooting on Tuesday night.

"Shots fired. Shots fired," an officer can be heard saying. "We've got a male conscious and breathing. He's got a (gunshot wound) to his stomach."

Protesters seemed to think Torres was shot while he was unarmed. Deck-Brown spoke on the shooting and subsequent protests Wednesday morning and said the officer's body-worn camera was activated. A judge authorized the release of dash and body cam video from four officers who responded to the scene.

Deck-Brown said the footage, along with the released 911 calls, will confirm that Torres was armed.

Raleigh police chief Cassandra Deck-Brown spoke after protesters showed up at her home in March.

"The 911 call, it's in reference to an individual with a gun," Deck-Brown said of the call. "You will see the individual does have a pizza box, but he does have a gun."

Raleigh police said a handgun described by the 911 caller was found at the scene. No officers were injured.

RPD said the officer who fired was wearing a body camera that captured the shooting. Other officers present were wearing cameras as well.

The shooting occurred in the same shopping center where an April 2019 officer-involved shooting happened.

A large crowd of protesters and onlookers gathered at the scene following the shooting and took to Deck-Brown's east Raleigh home.

Witnesses said Torres was only carrying a pizza and that he was headed home to a nearby mobile home park just across Rogers Lane. A crowd collected and protests went on throughout Raleigh, lasting past midnight. Rolanda Byrd was among those present. Byrd's son, Akiel Denkins, was shot and killed by Raleigh police in 2016 in what was ruled as 'justified.'

Javier Torres was shot and taken to the hospital.

Large crowds also gathered downtown at the Wake County courthouse on Fayetteville Street and eventually spilled over to the space in front of ABC11's studio across the road.

Demonstrators also stood at the capitol building downtown and around Moore Square. When speaking to the media, Deck-Brown referenced protesters causing harm to people and property. One person was arrested for assaulting an ABC11 photojournalist, who was not seriously hurt. Jonathan Canfield, 23, was charged with simple assault.

Deck-Brown said protests spurned in part from misinformation that spread on social media. She asked the public not to rush to judgment and allow the investigation to take its course.

"This is not who we are as a city," Deck-Brown said. "But it's also important that individuals who have a desire to voice their concerns, there is a method by which they can do that without damaging other people's property, without harming other folk in the process. And we saw that last night...that's not who we are."

The Raleigh-Apex NAACP office said it began receiving calls, later proved false, alleging Raleigh Police "shot a child in the back" while he running with a pizza.

When he got there, Givens learned that the person shot was Torres, who was awake and receiving medical attention at a hospital. Givens also said that Torres's family was at the hospital.

"The Raleigh-Apex NAACP will be standing by for the Raleigh Police Department to release the 5-day report and video footage captured from different perspectives that shows the officers interacting with and shooting Javier Torres," Givens said. "We are working to get all of the facts and will proceed from there. Nonviolence is a core principle of the NAACP and at the heart of all of our activities. We do not support harming any person or property."

On Wednesday morning, there was a court hearing regarding the body and dash-camera footage of this incident. President Givens, who was in attendance, recommended to the court participants that the audio and footage be released. The judge has now authorized the release of dash and body camera video from four officers who responded to the scene.