Thanksgiving is a day off for some, but many in the Triangle still hard at work 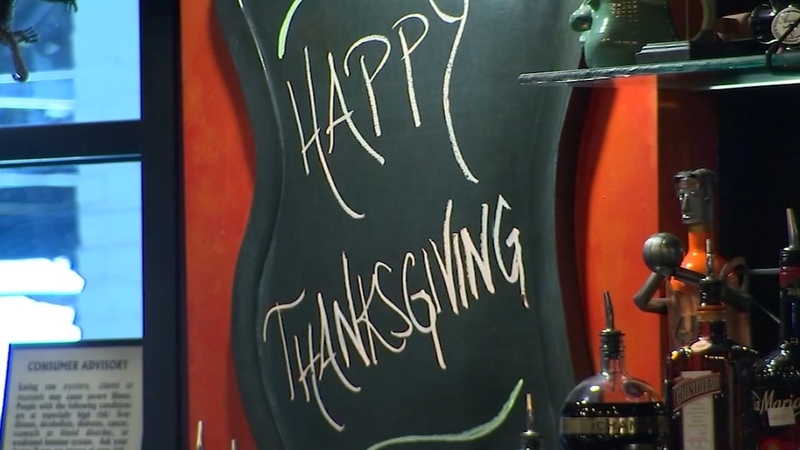 Triangle workers give of themselves while everyone else takes Thanksgiving off

RALEIGH, N.C. (WTVD) -- Stacey Horowitz is a proud mom of twin sons and a daughter, but her Thanksgiving takes place in another kitchen preparing food for some 450 people.

Horowitz and her family own and operate Margeaux's Restaurant, which has been open every Thanksgiving holiday since it opened in 1992.

"As long as I'm with my family, I'm happy," Horowitz says as she waves at her boys, Zach and Jeremy, both roaming the dining room (she's sad about her daughter being with her boyfriend's family, but understands). "There's a lot of people, be it new to the area or they don't have family in the area, or two working families and don't have time to cook. There's a lot of people who don't want to cook. They're looking for places to go."

There's also Horowitz's extended family - her staff of 35 - which include cooks, servers and bartenders who have been working there for years.

"We have a big meeting beforehand and we talk about how we're making memories for people today," bartender Erik Beidler tells ABC11. "It's also about having a good time ourselves and being part of it all."

Margeaux's is just one of several restaurants open on Thanksgiving, including major chains like Maggiano's and Golden Corral.

The restaurant industry is also one of many that does not shut down for the national holiday, as airports, hotels, gas stations and convenience stores stay open. Retail shopping, of course, is part of many family traditions.

"You never know who's going to need to come to an ICU," Anna J., a nurse at WakeMed's Cardiac Intensive Care Unit, laments to ABC11. "We take care of the sickest of the sick. All around the Triangle, all around the state, people traveling don't expect to come to the hospital sick as they are but they do and we have to be prepared."

WakeMed's Raleigh campus cannot afford to have a skeletal staff; instead, the same roster of 300+ doctors, nurses, pharmacists, maintenance crews, cafeteria cooks, lab technicians and campus safety officers come to work as if this was any other Thursday.

"I just feel like it's good to help people not as fortunate as I am," Anna says. "If I can give them an opportunity to smile or be their family for the day, I should be able to do that."
Report a correction or typo
Copyright © 2022 WTVD-TV. All Rights Reserved.
TOP STORIES
RDU expects more traffic for Memorial Day weekend
Tornado warnings expire, severe thunderstorm watch remains in effect
I-40 west reopens in Johnston County after multi-car crash
Victim found dead with gunshot wound in Durham crash identified
1 in 6 NC counties have more gun dealers than mental health providers
Durham mother who founded anti-gun violence group loses second son
Official admits police made 'wrong decision' in TX shooting
Show More
Bank employees help kidnapped woman after she asks for loan
Judge dismisses Trump's lawsuit, allowing NY probe to go on
Meghan Markle pays respect to Texas school shooting victims
Explosion rocks neighborhood near Philadelphia, 4 confirmed dead
Depp, Heard defamation trial continues with closing arguments
More TOP STORIES News