Tips on how to view the Great Conjunction on Dec. 21 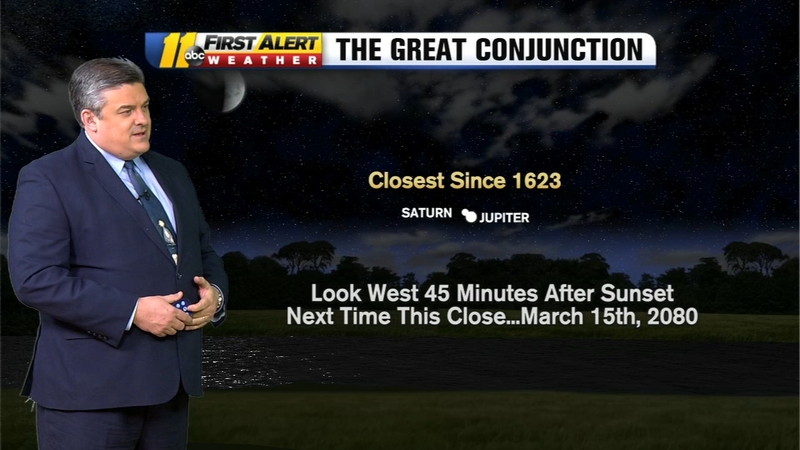 Where to look to see the Great Conjunction

On the night of the Winter Solstice, Jupiter and Saturn will create a rare viewing experience from Earth known as a "Great Conjunction."

Jupiter and Saturn, two of the brightest planets in our solar system, will be so close in the night sky that they will appear as though they are touching.

This rare event, sometimes dubbed a "Christmas Star," is known in astronomy as a "Great Conjunction."
EMBED More News Videos

This month, Jupiter and Saturn will come together in the sky to shine brightly as a "Christmas Star," according to AccuWeather.

An astronomical conjunction is known as two planets that are or appear close together. The Jupiter-Saturn pairing is known as a "Great Conjunction" because of its rarity. Other planetary conjunctions happen multiple times per decade, but Jupiter and Saturn only perform a celestial dance once every two decades.

The sighting is seldom because Jupiter takes nearly 12 years to make a revolution around the Sun while Saturn requires nearly 30 years for the same revolution.

The conjunction will look like the brightest star in the sky, First Alert meteorologist Don Schwenneker says.

But not all conjunctions are created equal. The last time there was a Great Conjunction at night, similar to the one we'll see, was nearly 800 years ago.

But you don't have to wait to view the planets in close proximity. For weeks, the planets have been appearing closer together but they will appear closest on December 21.