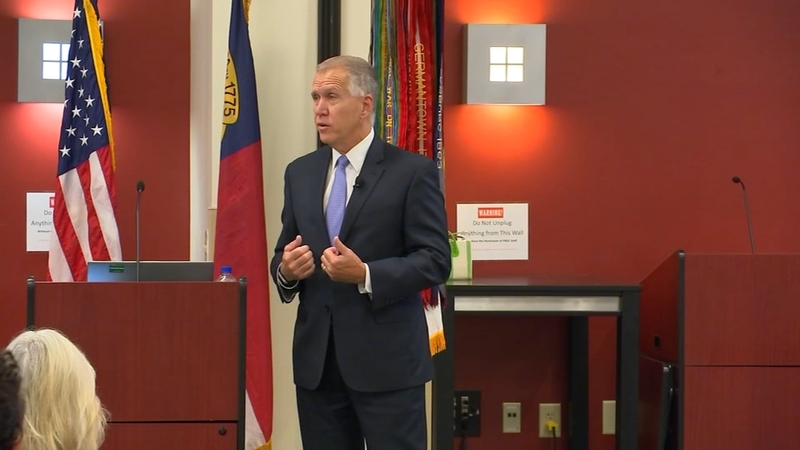 FAYETTEVILLE, N.C. (WTVD) -- Just days after calling the official impeachment inquiry a "total farce," U.S. Sen. Thom Tillis, R-NC, returned to Fort Bragg, where he said the focus should be on our military.

"If we're honest with ourselves, the housing provider has missed some of the work they should've gotten done. The Garrison and DOD failed and Congress failed and in fact, the administration failed," Tillis said.

Tillis headed up a Town Hall where he addressed questions and concerns from military families on the housing crisis. Despite an overhaul, many still blame Corvias -- the private housing provider for delays and damaged homes.

"They're putting Band-Aids on," said one military wife.

Tillis heads up the Senate Armed Services Subcommittee, which is tasked with addressing issues that affect military families. He also supports a plan that would raid $80 million meant for the military going to the border wall.

"The bottom line is that there was roughly $80 million in terms of money. Half of that was for a project at Fort Bragg that was not moving forward. The remaining three projects and I've been assured by Secretary Esper and Secretary Spencer, Secretary of the Navy is the funding available this year isn't necessary and relates to longer-term projects," Tillis said.

Tillis joined a host of Republican leaders who question the validity of the whistleblower complaint and motives. On Friday, he doubled down on his statement that called on Democrats to focus on "issues that matter."

"I sometimes wonder though, based on past behavior, if this is a genuine fact-based process they're going through or political gains. Look, I'm in the Senate trying to figure out how to get the National Defense Authorization Act passed," Tillis said. "The resources in the House seemed to be focused on is their obsession with impeaching this president."