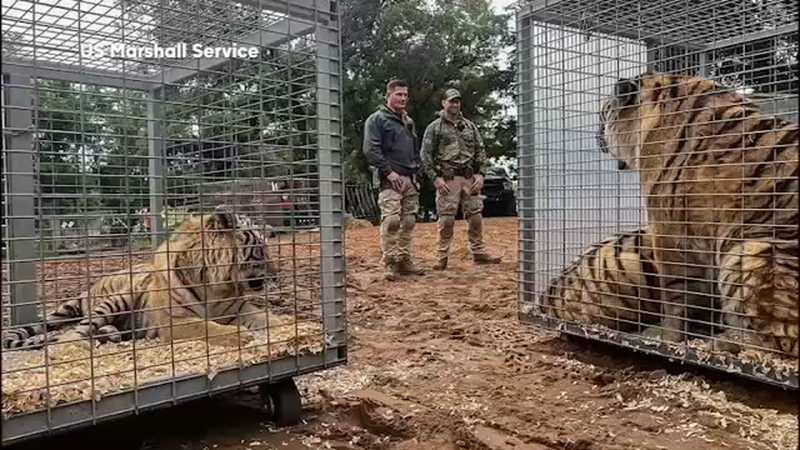 PITTSBORO, N.C. (WTVD) -- Carolina Tiger Rescue said Tuesday that it was one of the organizations that took part in the Justice Department's seizure of 68 protected big cats from Jeffrey and Lauren Lowe's Tiger King Park in Oklahoma last week.

Carolina Tiger Rescue is a big cat sanctuary in Pittsboro.

The animals rescued included lions, tigers, lion-tiger hybrids and a jaguar, according to authorities.

Carolina Tiger Rescue said it is is caring for four of the cats while the Justice Department seeks permanent forfeiture of the animals.

For 45 years, Carolina Tiger Rescue has been a refuge that allows big cats and other animals to live out their lives in safety.

In an affidavit, investigators detailed allegations of disturbing conditions they documented for some of the big cats rescued in Oklahoma -- observing some who showed signs of high anxiety and stress, with several losing their fur and showing signs of weight loss, while others had signs of untreated wounds.

Lowe had previously taken over the Greater Wynnewood Exotic Animal Park from Joseph Maldonado-Passage, otherwise know as "Joe Exotic," who was the basis for the viral 2020 Netflix documentary "Tiger King."

Maldonado-Passage is currently serving prison time after being convicted for attempting to hire a hitman to kill Carole Baskin, a big-cats rights activist who sought to highlight poor treatment of animals.

"We are glad to see the Department of Justice working hard to better the lives of big cats in captivity, beginning with Tiger King Park," said Pam Fulk, Executive Director of Carolina Tiger Rescue. "We thank everyone who was involved in this operation."