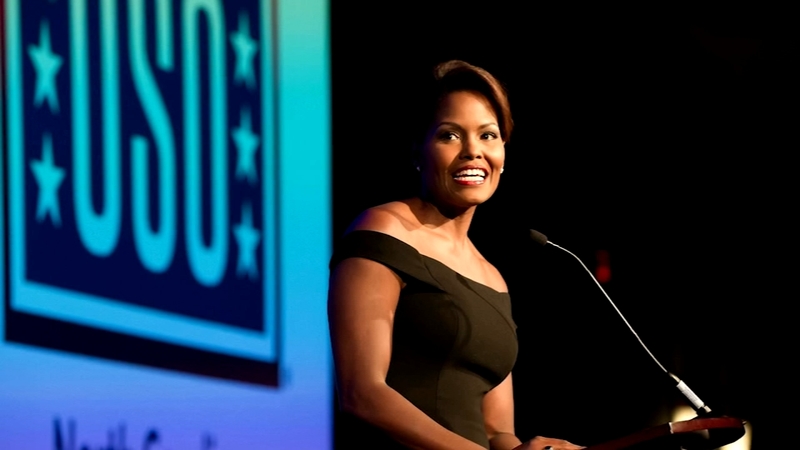 DURHAM, N.C. (WTVD) -- The USO of North Carolina honored ABC11's very own Tisha Powell at the Salute to Freedom Awards Celebration Saturday night at the Sheraton Imperial Hotel in Durham.

Since 2012, Tisha Powell has emceed the USO the Salute to Freedom Award Celebration. In the first two years, she shared the duties with her co-anchor Larry Stogner. Stogner was a Vietnam veteran and Tisha, an Army-wife, doing the event together meant a lot to her.

"It was one of our favorite events that we did together, and matter of fact, it was usually one of the only events we would do together every year. And now that he's passed away I continue to think of him..." Tisha recounted. "Every time the USO gala comes around, I think about how he would've wanted it done and he was a perfectionist! And I always try to make him proud every year."

Tisha loves that by emceeing the Gala every year she is also helping the USO of North Carolina in its mission to strengthen America's military service members by keeping them connected to family home, and country throughout their service to the nation.

"It's something that you look forward to just to be around the military community and let everybody how important it is and how much we care and how much people care about them and also it supports the USO. The USO is a special place, it gives people an opportunity to just get away from it all when they're traveling and to feel a taste of home and just to be around an atmosphere that allows them to relax."

The USO Gala has given Tisha multiple fond memories to never forget. She recounts the moment when she got the chance to meet and greet the American country music duo, Montgomery Gentry, shortly before Troy Gentry passed away in 2017.

"I just feel so fortunate to have met him (Troy Gentry)," Tisha said.