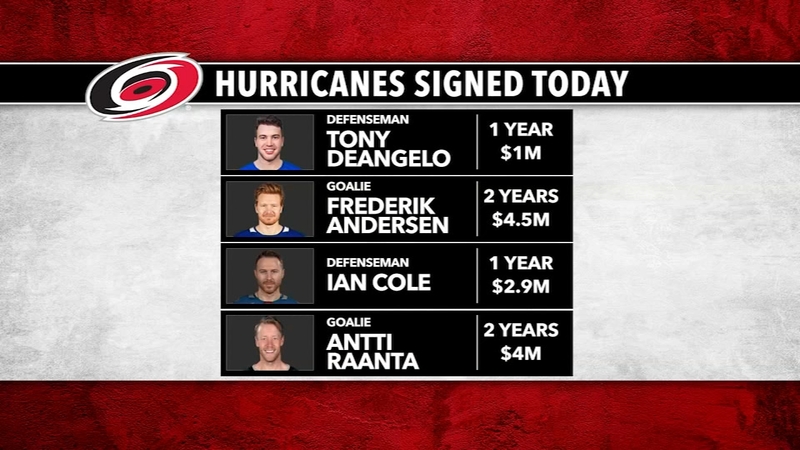 The Canes signed Tony DeAngelo to a one year, $1 million deal, potentially putting the franchise reputation and positive culture at risk.

Back in January, DeAngelo came to blows with New York teammate Alexandar Georgiev after a loss. The Rangers then demoted the defenseman for disciplinary measures and placed DeAngelo on waivers to which there were no takers.

But legitimately how do I cancel my season tickets? I’m not driving 4+ hours for games to watch Tony DeAngelo play

"There is no doubt that he has made mistakes. We acknowledge that and more importantly, he recognizes that he's made mistakes and has to continue to work and grow as a person," Waddell said. "We felt comfortable after doing all the research to bring him here on a short-term deal and we will continue to work with him."

Hurricanes GM Don Waddell responding to the backlash of signing Tony Deangelo "something we are fully aware of... we are comfortable he's a different person."

Waddell said everyone in the organization was on board with the signing including head coach Rod Brind'Amour.

DeAngelo said he has been receiving counseling and is ready to move on from past mistakes.

"I think there is a perception of myself, and I think there is a reality as well that gets lost a little bit from what you read on social media," DeAngelo said. "Everybody likes to make up their own thing, but I think once the fans get to see me play and see me around the community they are going to take a liking to me, and I hope they do."

He added, "My agent set us up with some good people, and I think there has been a lot of progress, and now I just have to go to Carolina when I get there and prove it to the team and the players and obviously ownership and coaches. I'm looking forward to it."

In other moves, the Hurricanes turned over their entire goaltending position in the past week.

They agreed to terms with former Toronto goalie Frederik Andersen on a $9 million, two-year deal and brought in Antti Raanta from Arizona for $4 million during the next two seasons. Waddell said these were the goalies Carolina targeted all along.

Despite combining for a .920 save percentage that ranked third in the league, the Hurricanes moved on from Alex Nedeljkovic, Petr Mrazek and James Reimer. After trading Nedeljkovic to Detroit last week, Mrazek signed with Toronto and Reimer with San Jose on Wednesday.

Carolina also acquired defenseman Ethan Bear from Edmonton for forward Warren Foegele, agreed to terms with veteran defender Ian Cole on a $2.9 million, one-year contract, re-signed Jordan Martinook for $5.4 million over three years and brought in Josh Leivo for $750,000 for next season.