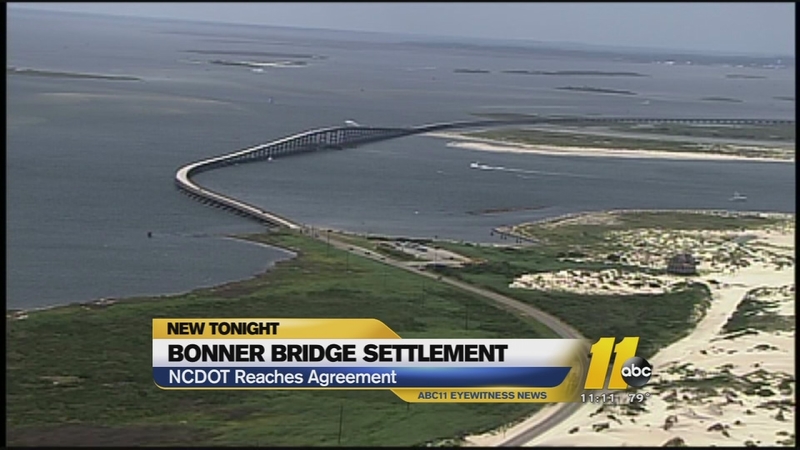 NAGS HEAD, NC -- North Carolina transportation officials have reached an agreement with environmental groups that would allow for the construction of a new span across Oregon Inlet to replace the aging Bonner Bridge.

The state Department of Transportation on Monday announced a proposed settlement with the Southern Environmental Law Center to build the new bridge parallel to the current one. The project has been delayed for years by legal wrangling and budget concerns.

Gov. Pat McCrory praised the deal in an event at the southern end of the bridge, which was built in 1963 with an anticipated lifespan of 30 years. Buffeted by salty winds and eroding tides, taxpayers have spent tens of millions in recent years to keep the narrow old bridge open.

"This is an historic day for the people who call the Outer Banks home and the millions of visitors who travel here each year," McCrory said. "Today, we begin building a bridge that has been more than two decades in the making."

The law center represents groups who have pushed in court for a longer and more expensive bridge to bypass the Pea Island National Wildlife Refuge, which is bisected by a two-lane ribbon of asphalt prone to frequent flooding. Under the agreement, state engineers will consider options for rerouting vulnerable sections of North Carolina Highway 12 out of the refuge and over Pamlico Sound near Mirlo Beach and the new inlet cut through the island by Hurricane Irene in 2011.

Past estimates have put the price tag for the 2.8-mile bridge favored by the state at about $215 million. The environmental groups recommended a 17-mile route that would have created the second-longest bridge in the United States that state officials said would cost more than $1 billion.

DOT spokesman Mike Charbonneau said years of delays and the redesign on N.C. 12 would add some additional costs, but that the total amount was not yet clear.

The compromise announced Monday allows both sides to claim a measure of victory.