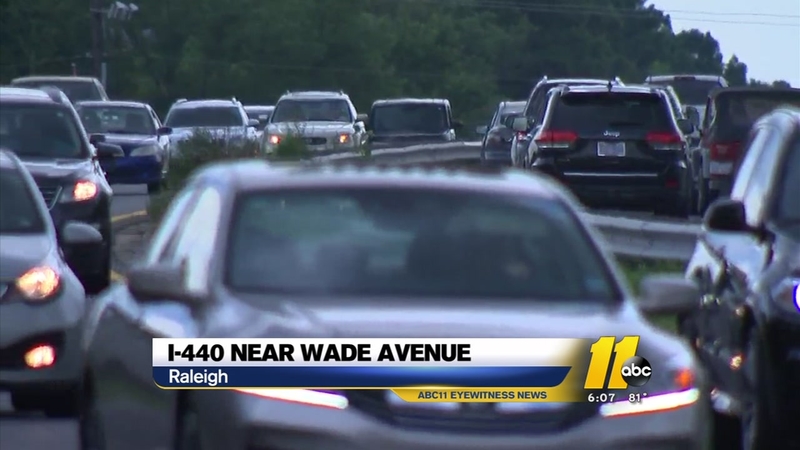 CARY, North Carolina (WTVD) -- The North Carolina Department of Transportation announced Tuesday that the long-awaited widening of the western section of the Raleigh Beltline is expected to begin in 2018.

The stretch of I-440 from Wade Avenue to Walnut Street in Cary is the only section of the 26-mile beltline that is not three lanes in both directions.

That four-mile segment is just two lanes each way.

According to NCDOT, rush hour in that area causes some of the worst traffic problems in the Triangle.

"It's horrible; things need to be done," said commuter Bahati Mathias. "The traffic's huge and you have to wake up two hours prior for you to get where you have to be."

When Mathias heard the plans are finally being put in place to widen that stretch, she was ecstatic.

NCDOT officials said that stretch of the beltline, built in the early 1960's, not only has infrastructure problems but is dangerous.

"The crash rates along this section of 440 are about three times the statewide average for similar interstates in urban areas," said engineer Joey Hopkins during an afternoon news conference at NCDOT headquarters in downtown Raleigh.

He told reporters that much like the current Fortify construction project on the southern beltline, two lanes in each direction will be maintained during most of the construction.

But he said there will be occasional lane closures on nights and weekends.

He also announced that the organization wants the public's input before soliciting bids for the project in early summer of 2018.

An open house and public hearing will be held on August 8 at the McKimmon Center on Western Boulevard in Raleigh.

Hopkins hopes citizens will be receptive and patient.

The I-Team has also learned about another construction project in the works. NCDOT will also widen an 11-mile stretch of I-40 from Raleigh to the Cleveland School area (around N.C. 42) in Clayton. The project is set to start in 2018 as well. For more information, check out NCDOT's website.
Report a correction or typo
Related topics:
trafficcaryi 440constructiontrafficraleigh news
Copyright © 2021 WTVD-TV. All Rights Reserved.
TOP STORIES
Is $1M incentive upping COVID vaccinations? It's too early to tell
2 Bragg paratroopers found dead in barracks over the weekend
Tropical depression forms off NC coast
Girl, 15, killed by lightning strike at beach while swimming on vacation
Teen gets associate's degree, IT certificate before HS graduation
'DEFUND' to be removed from in front of Durham police headquarters
4 mass shootings in 6 hours leave 38 wounded, 6 dead
Show More
Biden reaffirms US 'sacred' commitment to NATO
Another member of prominent South Carolina legal family dies
IRS says it's working 'as fast as possible' after tax refund delays
LATEST: Wake County holding vaccine boot camp
Win big prizes by simply shopping in downtown Raleigh
More TOP STORIES News