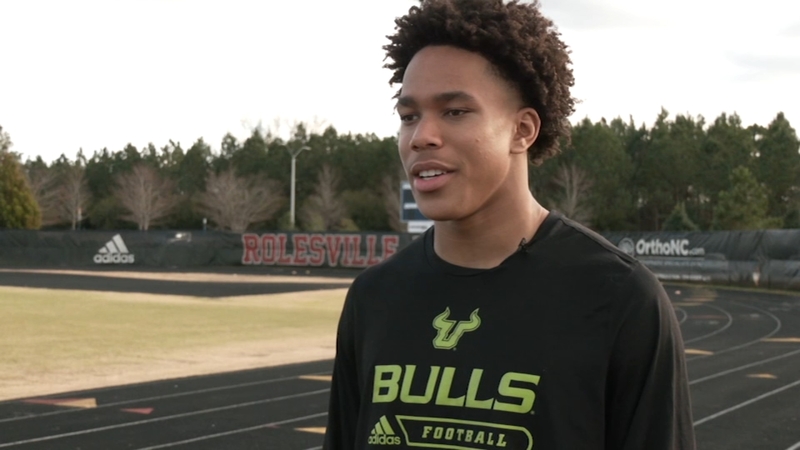 ROLESVILLE, N.C. (WTVD) -- The football field at Rolesville High School has been a classroom for senior quarterback Byrum Brown, and it's taught him many lessons.

"I've learned that it's not over until it's over," Brown said. "There have been some games we've been down and we kept rallying but battled back and ended up with the victory."

The 17-year-old Raleigh native committed to play football at the University of South Florida after aggressive pursuits and offers from 14 universities including North Carolina A&T and North Carolina Central University. He and his father along with many others nationwide watched as HBCU Jackson State University landed No. 1 football recruit Travis Hunter, who had been long-committed to Florida State.

"The game is changing," Brown said. "HBCUs have always had great academics and athletics. They just don't have the funding. It's huge to know somebody that high of status and potential is going to an HBCU."

His father, Andrew Brown Jr. added: "It has a lot to do with name, image and likeness deals because now those athletes can go to HBCUs and still get paid. So if they're lacking in facilities, they have the opportunity they didn't have before."

HBCU football coaches call Hunter's move a game-changer for HBCU athletics. Saint Augustine's University head football coach David Bowser said it changes the perception of Historically Black Colleges and Universities that typically don't have the resources that some other institutions have. He said what matters is how well you connect with the coach.

"How many more square footage do you need in a weight room? How many times can you eat steak in a week? What it really boils down to at the end of the day is if your family is struggling with something or if I need somebody to understand how I'm dealing with certain things and that person looks me in the eye and can help me grow and develop as a man, that goes miles," Bowser said.

"They want to get a notch on their belt because they're sending kids to Power Five programs," Oliver said. "It would be nice if these high school coaches get on board and help push HBCUs just get the young men on campus to see what we have to provide."

Meanwhile, Brown is just weeks away from heading to South Florida for football where he says he'll be watching Hunter.