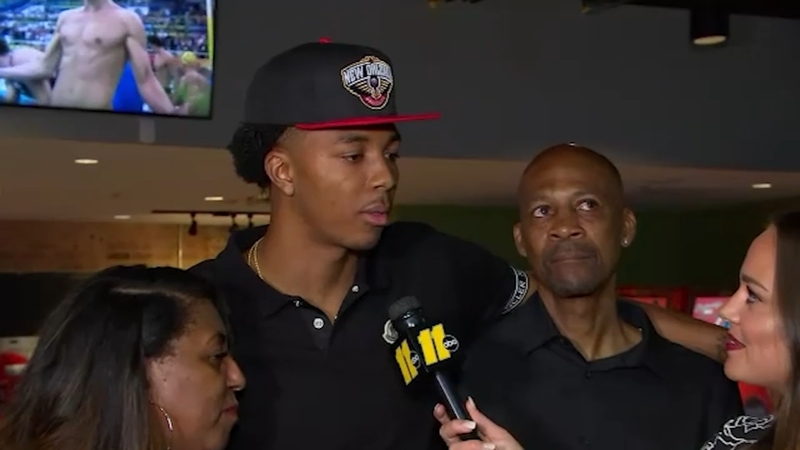 RALEIGH, N.C. (WTVD) -- Years of hard work, sweat and tears paid off in a joyous moment Thursday night for Trey Murphy III and his family when the 6-9 guard/forward from Durham was chosen in the first-round of the NBA Draft.

"Just overwhelming, the emotions," Murphy III said in an exclusive interview with ABC11's Bridget Condon. "Been working since I was 5 years old. Been playing this game for a very long time."

Murphy, who had a successful senior season with Virginia, decided to hold his NBA Draft watch party in Raleigh with family and friends rather than go to Brooklyn to the site of the draft.

"It's just special to me to have all my family and my friends here because they were part of the ride, and part of the journey," Murphy III said. "I didn't have a linear path, I'll say that. There was a lot of winds and bumps in roads, you know, and those people, they were the ones that helped me got out of those tough times. I'm just glad I can share that moment with them."

After high school at Cary Academy, Murphy III began his college career at Rice University, where he led the team in scoring (13.7 ppg) as a sophomore.

His dad, Kenny Murphy, was also his youth coach and toughest critic, and the elder Murphy was emotional as his son's journey culminated in a first-round NBA selection.

"The most satisfying moment in our journey," Murphy said, "we went to a tournament in Atlanta, and he had received an offer from Rice, where he ended up going to school initially out of high school, and he turned to me and said, 'Dad, I realize and understand why you did what you did.' So, it was a method to my madness and tonight it paid off."

Murphy III acknowledged that his parents have been a strong support system through years of honing his basketball skills.

"My dad's been super hard on me, and I appreciate him a lot for it, and my mom, she's been the good cop in this and so, it's been a lot of work, lot of tears, lot of sweat, lot of blood, and I'm just very thankful for this moment," he said.

His mother, Albeda Murphy, said she brought balance to the family, acting as a counterweight to her hard-charging husband, who played college basketball himself at East Carolina from 1986-88.

"Trey and I, he's just always been an easy young man to raise," she said. "I've told him before, I told him I just wanted him to be a good person."

Kenny Murphy said he pushed his son from the outset because he wanted him to give his best effort.

"I think the biggest thing for me was ... I told him when he was 5 years old, that you're either going to be great or I'm going to make you quit," Kenny Murphy said. "I tried to make him quit, because I knew that if he didn't quit, he was going to be pretty good."

He also was named to the All-ACC Academic Team.

"I always tell people, as a mom, it's so easy to brag on your child," Albeda Murphy said. " And people think, oh well, she's a mom, but then I used to say, just wait till you meet him, and then when people just get an opportunity to meet him, they're just overwhelmed and they just think he's a just a really good person, and he is ... he's just there for people and they love him."

That's what the Pelicans are getting: A smart, high-character player with a smooth stroke from long-range. In New Orleans, Murphy III will get an opportunity to link up with Zion Williamson, who Murphy III watched when Williamson played in Durham for Duke University.

"He gets to the rim at ease, and he's going to draw a lot of people, and so, just being on the outside, being able to shoot for him and space the floor, and you know there's going to be a lot of dunk-contest dunks out there, so that's what I'm really excited for," Murphy said at the thought of playing with the dynamic Williamson.

The Pelicans are eager to see what happens, too.

"We wanted high-character human beings," Pelicans GM Trajan Langdon, a former Duke star himself, said late Thursday night. "We talked about that for a long time. The one thing we wanted to do this summer was bring in defensive-slanted guys, high-basketball IQ guys and shooting. I think we did that."

Murphy III said he got a few text messages before his name was called and he was trying to stay calm in the moment.

"Really just being around family," he said. Them being able to share this moment with me, it's hard to put into words."

His father also struggled to find the words to convey his pride and emotions.

"I can't describe it. It's the best feeling other than the day he was born that I've experienced," Kenny Murphy said. "It's a surreal moment, and I just cannot tell you how overwhelmed with just joy and happiness I am for him, Because he has worked so hard."
Report a correction or typo
Related topics:
sportsdurhamcaryraleighrice universityexclusivecollege basketballnbafamilybasketballgood sportsnba draft
Copyright © 2022 WTVD-TV. All Rights Reserved.
TOP STORIES
AAPI heritage celebration highlights cultures and traditions
Barbershop Buzz helps concerned men share fatherhood advice and tips
Firefighters called to two-alarm fire in Cary
1 person injured in shooting in Fayetteville, police investigating
1 person is left seriously injured after 8 car crash in Durham
Runner dies after collapsing at finish line of Brooklyn Half Marathon
Volunteers at Raleigh church package meals for people in need
Show More
Russia's claim of Mariupol's capture fuels concern for POWs
Man charged in Hope Mills double murder
Some peanut butter recalled for potential salmonella
Smith, Raanta, Hurricanes top Rangers for 2-0 series lead
First formula flights from Europe to arrive this weekend
More TOP STORIES News