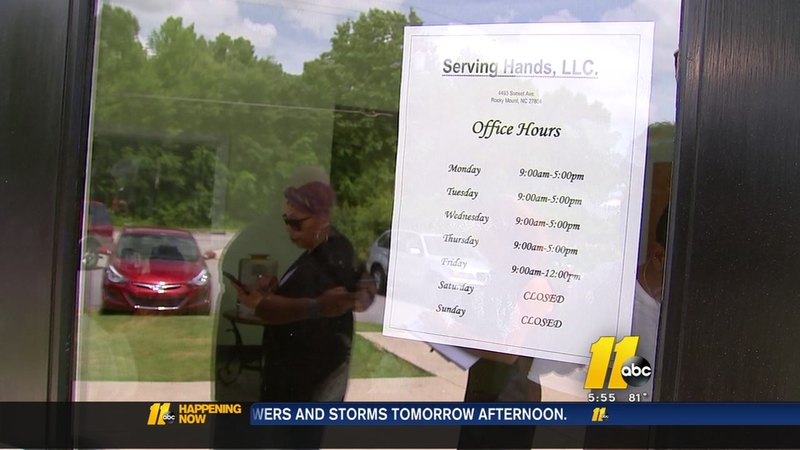 Employees have said that it's tough to pay their bills when the money they worked so hard for is not all coming in.

Serving Hands employee Earl Speight received his paycheck, but when he went to the bank to cash it he said that he was told "These are no good. There's no money in the bank."

Aside from his paycheck troubles, one of his client's checks was unable to be cashed as well.

"These are elderly people with mental problems, and they are not being taken care of," he said.

Serving Hands LLC provides care to clients with developmental disabilities and mental illness and receives money from the state and the federal government to care of these clients.

"This is Medicaid money along with the state of NC money, which is the taxpayer money. I want taxpayers to know just what happens to your money," said Speight.

Serving Hands' clients confirmed they have not had access to their social security money or disability money that they typically receive from Serving Hands.

"You can't just drop your clients off. So we are trying to do what we can," said employee Sherman Reedy.

Some employees have said that the lack of paychecks has made it tough to take care of themselves.

Pat Henry added "I've got a check and went to the bank four times and said non-sufficient funds. The average person lives check to check so if you miss a check you have bills going unpaid."

While I was at Serving Hands, there was no sign of owner Kim Kozlowski anywhere.

I asked to speak with the manager, but I was told no.

I tried calling, texting, and even going to Kozlowski's home, but no answer.

We also reached out to N.C. DHHS and Trillium, who oversees state providers like Serving Hands and no one would comment about what the employees and clients were going through when it came to their money.

But good news for the employees and clients; a day after we visited Serving Hands, many of them received their April paychecks and client checks that actually cleared the bank.

Even though they said they are happy they got the money owed to them for April, they say they are still owed money for May.

They said that they were supposed to get the checks on Monday, but that didn't happen.

They also said Serving Hands doors are now locked, and it's not operating.