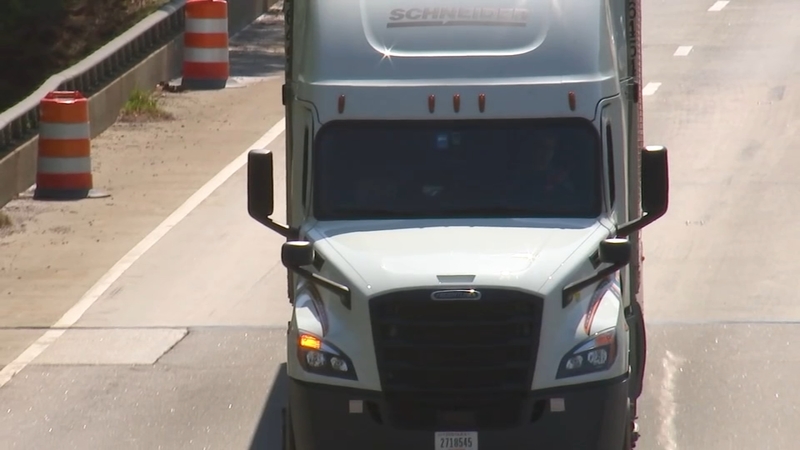 SMITHFIELD, N.C. (WTVD) -- If we didn't figure it out a few months into the pandemic, then we certainly found out during the gas pipeline shutdown.

Truck drivers are the lifeblood of the American economy and right now we don't have enough of them.

Just a quick look around your house confirms that most everything in it from food to furniture came to you thanks to a truck driver.

The oldest truck driving school in the nation, right here in the Triangle, is doing its part to replenish the supply of drivers and address the problem of keeping them in the industry.

"A lot of people are realizing that truck drivers are the heart of America," Amanda Johnson said.

Johnson figured it out when the shortages first hit at the start of the pandemic.

After being laid off from her job with a car rental company at the start of the pandemic, she decided to look for something more secure by getting her commercial driver's license or CDL.

"We saw all the truckers still moving and being essential workers during the shutdown," Johnson said. "So having a CDL I feel like will open up a lot of options."

A main reason for the shortage of drivers is the inability of the industry to recruit young people to replace the majority of drivers who are retiring, according to John Freer the lead instructor at the North Carolina Truck Driver Training School.

The driver shortage has also meant employers hiring truckers have increased pay and benefits, in a push to attract and retain more drivers.

That's made a career behind the wheel more attractive to Freer's students.

"Average starting salaries of $60,000-75,000 for a new driver, incentives to make sure that they get home, benefits from day one," he explained.

The school is doing its part to help with the driver shortage by keeping classes full, but Freer said he now needs more instructors.

Still, despite the increase pay and benefits and the burgeoning job market, Freer said it's important that he's brutally honest with his students about what it takes to be a truck driver.

"This is not a job change for them, this is a career change, and more likely a lifestyle change," Freer said.

Johnson is not interested the dramatic lifestyle change of being a long-haul trucker, even though it pays the most.

The 34-year-old Nash County woman notes that there are plenty of jobs for local drivers, something we all learned a few weeks ago during the shutdown of the Colonial gas pipeline.