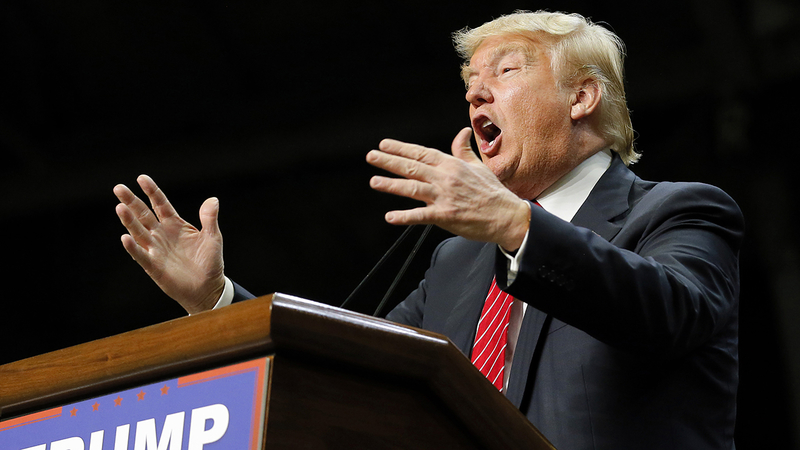 NEW YORK (WTVD) -- Republican President front runner Donald Trump has in the past made bold statements against Mexicans and Muslims. Now, the colorful candidate is coming to the defense of transgender people.

During a Town Hall Meeting on NBC's Today Show, Trump said North Carolina should not have passed the House Bill 2 law.

"North Carolina, what they're going through with all the business that's leaving, and all the strife -- that's on both sides, leave it the way it is. There have been very few complaints the way it is. People go. They use the bathroom that they feel is appropriate. There has been so little trouble," Trump said.

Asked about his business properties, Trump said if a transgender person such as Caitlyn Jenner were to walk into Trump Tower in New York, she would be allowed to use the bathroom of her choice.

"Grown adult men, strangers, should not be alone in a bathroom with little girls," Cruz said, calling his view "basic common sense."

Both Ted Cruz and John Kasich have no path to victory. They should both drop out of the race so that the Republican Party can unify!

The Rev. Patrick Wooden from the Upper Room Church of God agrees that HB2 protects the public.

"Those of us who still believe in good old common sense are now appearing to be racist or bigots or discriminatory simply because we believe that we should stand our ground on this common-sense issue," Wooden said. "It discriminates against bad behavior. No one thinks it is good behavior for a man to be allowed to use a woman's restroom."

The North Carolina Democratic Party was quick to respond to Trump's comments.

"Today Donald Trump joined the growing list of business leaders against HB2. Pat McCrory's discrimination law is so extreme even Donald Trump won't support it," said North Carolina Democratic Party Executive Director Kimberly Reynolds. "Over 400 businesses and organizations, Republican officials like Nikki Haley, and now even Donald Trump are speaking out against this disastrous law. It's time for Pat McCrory to admit he made a mistake and repeal HB2."

"Governor McCrory has always said that North Carolina was getting along fine before the Charlotte city council passed its unneeded and overreaching ordinance. Now that it has been overturned, businesses can adopt their own policies - like Target has - instead of being mandated to allow men into women's restrooms by government. Where the governor disagrees with Mr. Trump is that bathroom and shower facilities in our schools should be kept separate and special accommodations made when needed. It's just common sense."

Wooden tells ABC11 he likes Trump but has not endorsed him. Wooden believes Trump doesn't understand the principles behind the law and needs to read the bill.

"We're in a silly season and if this is his position, than that's his. I do not share it in any way," Wooden said.

Trump also says the state is being economically punished.

Donald Trump comes out against #HB2. Do you agree with what he said? https://t.co/nSTqMb7FxM

"North Carolina did something that was very strong and they're paying a big price and there's a lot of problems," Trump said.

HB2 bans local governments from establishing anti-discrimination rules that exceed state standards. The law, in-short, mandates that transgender people use the bathroom that matches the biological sex listed on their birth certificates.

The economic impact was discussed at length during a roundtable meeting in Chapel Hill.

"I'm having to defend the state of North Carolina to the rest of my industry," Fiocco said.

The readings inside her shop basically keep the lights on.

"It can pay an entire month's worth of rent in a one-night event. So they're really important," she said.

North Carolina Congressional Democrats are calling for a repeal.

State lawmakers will head back to work in a few days.

Fiocco hopes the law is overturned quickly before more damage is done and more authors write off the Tar Heel State.

She said, "I know for a fact that some authors are going to tell their publishers I will not consider any tour stops in North Carolina, so I don't even know what I'm missing."

HB2 is being threatened right now on federal and state levels.

The ACLU added three more names to its lawsuit challenging the state law.

McCrory has defended the law saying "there is a great deal of misinformation, misinterpretation, confusion, a lot of passion and frankly, selective outrage and hypocrisy" around the issue.

But McCrory has said he will ask legislators to repeal a part of the law that bans workers from filing discrimination claims in state court. Even when he signed the bill into law, he disagreed with that provision, he said. That part of the law "was very poorly thought out," he said.

McCrory signed an executive order affirming parts of the law directing people at government buildings and schools to use the multi-stall bathrooms corresponding to the sex listed on their birth certificate. And the law still prevents local governments and the state from mandating businesses extend protections to LGBT workers or customers.

The state law still excludes gender identity and sexual orientation as classes explicitly protected from employment and public accommodation. That means people still would not be able to sue in state court over employment discrimination based on those factors, even if lawmakers make the change McCrory is seeking, an attorney for the American Civil Liberties Union has said.