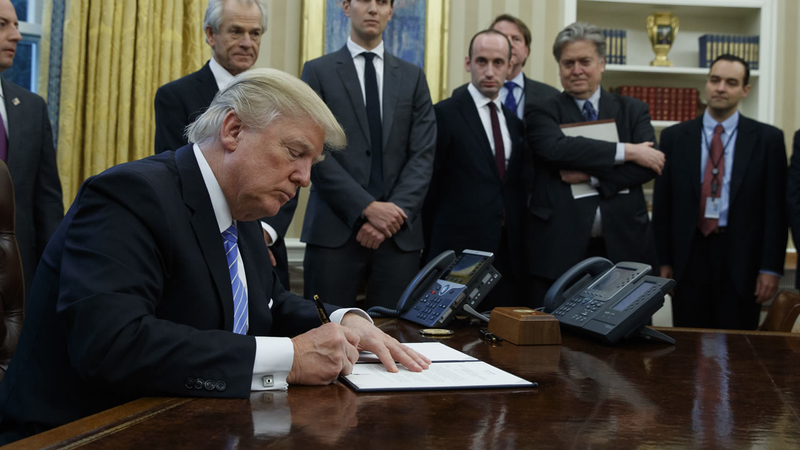 RALEIGH (WTVD) -- President Donald Trump is expected to issue an 8-page executive order, as early as Thursday, aimed at cutting off the flow of refugees into the U.S. and temporarily suspending visas to people from several largely Muslim countries.

The AP and the New York Times secured an early draft of the order and Muslims in the Triangle, Wednesday, called the plan un-American.

At the base of the bell tower at NC State, a small gathering of Muslim-American students gathered to discuss the news out of Washington. There was suspicion and concern.

Isra Jamil from Iraq and Doha Medani from Sudan are from 2 of the 7 predominantly-Muslim countries the Trump administration could suspend immigrant and non-immigrant entry for at least 30 days.

Federal law gives the president broad authority to suspend immigration of people whose entry is deemed "detrimental to U.S. interests".

"It hits home. My mom is going back to visit my grandpa who is insanely sick. We don't have electricity over there," Jamil explains. "We don't even know if we're gonna be able to bring her back here. We don't know how it's gonna work."

"It just seems very general and it doesn't make sense," said Medani. "And I don't know where it's going to end and what country is going to be next."

The White House cautions details of the measures could still be changed, but indicate the president plans to follow through on campaign promises to limit access to the U.S. for people from nations with ties to terror.
In an interview with ABC News World News Tonight Anchor David Muir Wednesday, President Trump said "I don't want terror in this country.

"Pakistan has suffered tremendously from terror attacks, so we know what security concerns are," Shiraz Medani, a Pakistani-American student. "For you to just have a ban on Muslims and create a fear of Muslims is irrational and it's not the way to do it."

"This is a time for not only Congress to step up but people to step up and resist this policy that is very detrimental to our credibility in the world," Khan said.

While the president's executive action calls for a temporary halt on most refugees from around the world, The White House would specifically block Syrian refugees indefinitely.