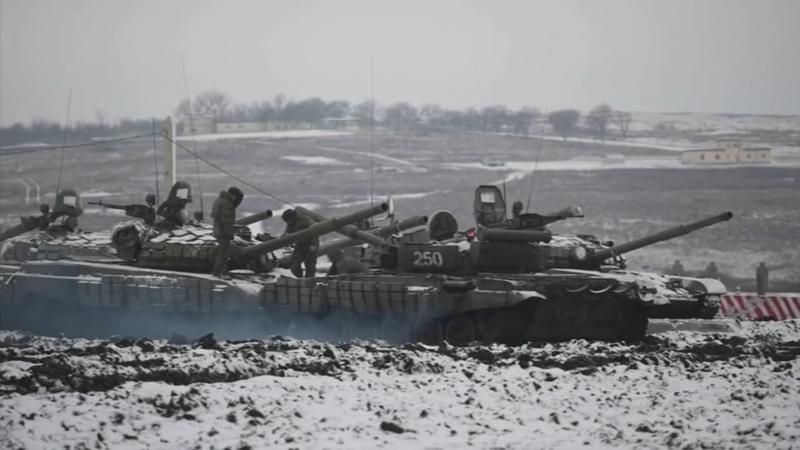 WAKE FOREST, N.C. (WTVD) -- At her home in Wake Forest, Olena Kozlova-Pates finds herself over 5,000 miles away from her native Ukraine. The flag she hangs on the porch, serves as a conversation starter with neighbors; a way to raise awareness about the crisis playing out in her homeland.

"We're both proud Ukrainians and American," Kozlova-Pates said. "And since Russia invaded Ukraine, I felt like it was important for me to also display my Ukrainian heritage. It is incredibly difficult to be here when you know that your parents, your grandparents, cousins, friends are there. What can happen tomorrow?"

When Kozlova-Pates was born, Ukraine was still a republic of the old Soviet Union. She was a teenager when the communist regime collapsed.

"Only later I learned that some of my family was persecuted by the Soviets in the beginning of the Soviet reign -- just because they were Ukrainians and owned land and they wanted to farm it, not just join the collective farm," said Kozlova-Pates.

Now every morning, Kozlova-Pates checks her phone and television for updates on the growing tension. Tens of thousands of Russian troops are now staged on Ukraine's border as fears mount of an impending invasion.

"We're talking about approximately 100,000 Russian troops," said Simon Miles, an associate professor at Duke's Sanford School of Public Policy. "That looks to observers with good reason, like the type of buildup you would do prior to a major military offensive.

Miles spent months in Russia and Ukraine, researching his book "Engaging the Evil Empire," an account of how Moscow and Washington ended the Cold War.

"I think there's two key reasons (for the troop buildup) that matter to the Kremlin. And when I say that I really need to say that matter to Vladimir Putin," said Miles.

Miles believes Putin sees Ukraine's thriving democracy as a threat to his autocracy, and that Putin is pulling on nationalistic heartstrings by positioning Russia as a world power again.

Why it matters in North Carolina: Miles says a destabilized Europe could pose big economic consequences. Not to mention the dangers of a lost democracy.

'I think that the principle of the thing matters," said Miles. "But also, I think, practically speaking for Americans, including here in the Triangle, Europe at peace is good for business and good for us."

Anxieties rising amongst Ukrainian Americans living in the Triangle as Russian troops creep closer to an invasion of their native country.
• • •
“Ukrainians have been dying for the idea of freedom, for liberty, for the idea of sovereignty.” #abc11 pic.twitter.com/UynwDasItN

Kozlova-Pates founded the group Ukrainians in the Carolinas as a way to advocate for assistance against Russian aggression. She also found community with other local Ukrainians; teaming up to raise money and send relief supplies back to Ukraine in this now years-long war to keep Russia out.