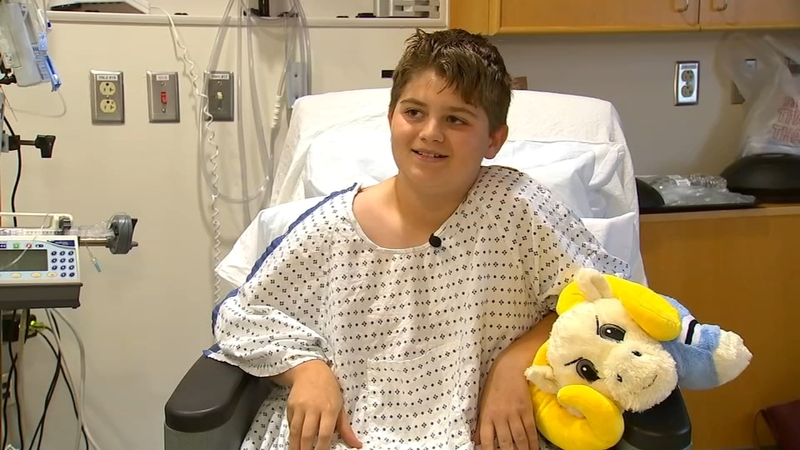 CHAPEL HILL, N.C. (WTVD) -- The UNC men's basketball team will be getting a pep talk from some of their youngest fans at UNC Children's Hospital this week.

For the next few days leading up to tipoff in the historic Final Four matchup of Duke vs. North Carolina, the hospital will be sharing videos of patients wishing the Tar Heels good luck.

"I know you can beat Duke," said Tyler Layman, 11, of Asheboro in his video recorded from his room on the hospital's seventh floor.

"I want them to feel pumped," he told ABC11. "Like, ready to get out there and beat Duke."

Layman, who had to have an emergency appendectomy for a ruptured appendix ended up at UNC's Children's when complications from the first surgery led to infections and the need for a second operation.

During his eight-day hospital stay in Chapel Hill, the Tar Heels faced off against St. Peter's in the Elite Eight round of the NCAA men's basketball tournament.

Layman still got to watch the game and cheer on Carolina surrounded by his family and a new stuffed Rameses his grandmother picked up for him on Franklin Street.

"I think the nurses outside thought I was in pain because I was screaming really loud," he said.

Kaitlyn Baron, Child Life Specialist, spent the week by his side; it's her job to help young patients and their families cope with extended hospital stays.

"I learned maybe midway through the week that he was a Tar Heels fan," she said.

Baron said March Madness and the Carolina victory that sent the Heels to the Final Four are just what the doctor ordered.

"It was something to kind of give him a sense of normalcy," she said. "And then as it got closer to the end of the week and he was starting to feel better, I think it was also a motivation for him to complete the steps that Nursing and the team was hoping he would do so he would be in a good place to be able to be discharged."

Discharged on Thursday, Layman will make it home with plenty of time to prepare for Saturday's big game.

"I feel like a lot of pressure's being put on them so I'm a little nervous but I think they can do it," he said. "Carolina's winning."
Report a correction or typo
Related topics:
sportschapel hillchildren's healthuncunc tar heels
Copyright © 2022 WTVD-TV. All Rights Reserved.
TOP STORIES
LIVE: Tornado warning for Durham, Wake, nearby counties
Homeless veterans get an assist from Durham's Rotary Club
Truck slams into NC woman's new home
SCOTUS makes it tougher for prisoners counsel was ineffective
Shelf cloud seen in Raleigh ahead of line of storms
New NC flood monitoring system ready for next big storm
Father puts 1,000 miles on his car to find specialty formula
Show More
Student says he was told not to mention 'Don't Say Gay' law in speech
Clayton police arrest man in shooting that injured 1
More than 75,000 pounds of baby formula lands in US amid shortage
Report: Top Southern Baptists stonewalled sex abuse victims
Arby's is selling a fast-food staple it's never offered before
More TOP STORIES News