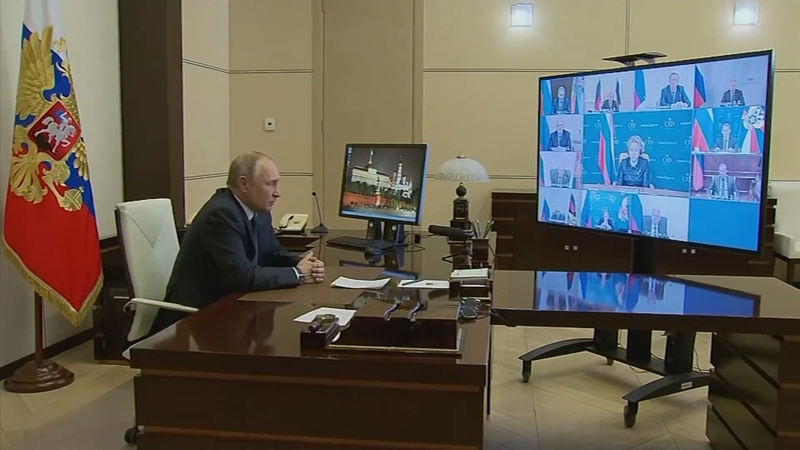 CHAPEL HILL, N.C. (WTVD) -- A day after holding a rally on campus in support of Ukraine, UNC's Center for Slavic, Eurasian and East European Studies hosted a forum Friday featuring professors from different universities, some of whom are still in Ukraine.

"If we can bring trusted friends and colleagues who we really know, who see the truth and know what's going on, and people can see them themselves. If you watched today, the authenticity (that) people spoke with is incredibly striking and very moving. And I think those voices are really, really powerful," the center's director Graeme Robertson said.

Robertson, who moderated Friday's event and spoke during Thursday's rally, has worked in both Russia and Ukraine and continues to be in touch with colleagues in those countries.

"Before (the invasion), and even right up until the night before, speaking with friends in Kyiv and friends in Russia, no one believed this was really going to happen. The idea that Russia would actually massively invade Ukraine just seemed so preposterous to everybody that we were all just shocked. Of course, the conversations afterward have been much harder," said Robertson.

UNC doctoral student Silviya Nitsova had been studying in Ukraine since September but left the country shortly before the fighting began.

"It was a gradual escalation of the rhetoric itself, the tensions, sort of the risk was also rising, and then I decided to leave," Nitsova, who was one of the panelists, said.

Watching from afar, Nitsova is worried about close ones still there.

"I have many friends who have become almost like family to me. Many of them decided to join the Territorial Defense Units," said Nitsova.

Outside her own participation, she wanted to hear from others who remain in the country to gain a better sense of the current situation; Nitsova noted the widespread unity Ukrainians have displayed.

"We see this unity all across the board, all across different kinds of societal segments. The people have become super united, people who speak different languages, who are different ethnicities, they come together, they help each other, they volunteer, they join Territorial Defense Units, they join the army. Civil society is super active, they're trying to streamline processes," Nitsova said.

Part of Robertson's work involves analysis and public polling to gain a better understanding of on-the-ground sentiments, an insight that is particularly valuable in Russia. However, as the Kremlin publicly combats dissent, Robertson is concerned it could be tougher to get a sense of everyday citizens' true feelings.

"Russia has (been) getting increasingly closed, increasingly cut off, increasingly repressive. What we've seen even in the last 48 hours is even a dramatic increase in that and a tremendous crackdown on the few remaining independent voices," said Robertson.

Friday's event was open to students, faculty, and members of the public; Robertson hopes people gained a broader understanding of the situation.

"Ordinary people, myself included, often feel powerless in front of these international events and these wars abroad. And what I wanted to illustrate today with our work is that these are ordinary people whose lives are being destroyed. and we can help. We can reach out to our politicians to urge for more support for Ukraine, both military support and humanitarian support. We can ourselves take steps to provide support whether in-kind or financially, and there are lots of sources to do that," Robertson said.
Report a correction or typo
Related topics:
educationchapel hilleducationrussiawarukraineunc
Copyright © 2022 WTVD-TV. All Rights Reserved.
TOP STORIES
Carolina Hurricanes beat Rangers 3-1 to take series lead
$1.3M Raleigh home listed on Zillow for $17,000 in latest scam
19 kids, 2 teachers killed in TX school shooting; gunman's mom speaks
4th grader 'did what she had to to survive' Uvalde shooting, aunt says
1 person found dead with gunshot wound in Durham crash
Several companies pull products linked to Jif peanut butter recall
Severe storms possible Friday, nice weekend ahead
Show More
Memorial Day triggers 'heavy' emotions for military families, veteran.
Chapel Hill, Hillside HS students stage walkout for Uvalde victims
Wake, Durham districts discuss school resource officer role
Chapel Hill man charged with murder after body found in burning car
'Goodfellas' and 'Field of Dreams' actor Ray Liotta dies at 67
More TOP STORIES News