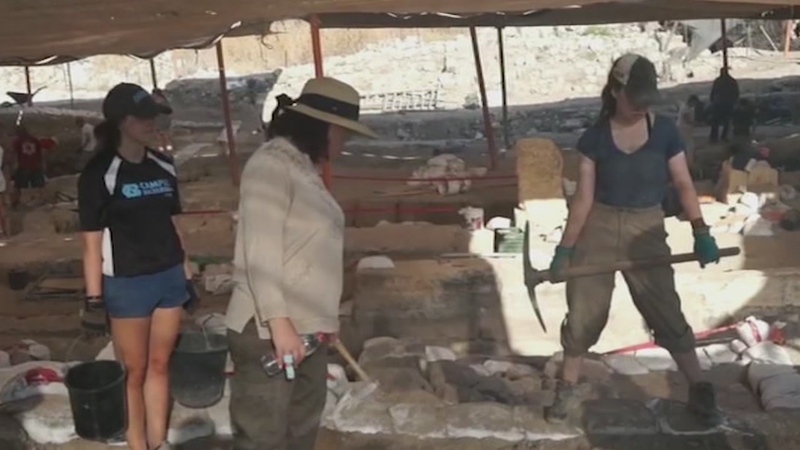 In the summer of 2012, Bryan Bozung heard a clink.

He was digging about six feet down in an excavation of a fifth century synagogue. All around him, students and scholars were swinging pickaxes, moving rocks and hauling out buckets of dirt.

But the sound he heard stood out. It wasn't dirt and it wasn't rock. Bozung, a 2012 graduate of Brigham Young University, called to Jodi Magness of the University of North Carolina at Chapel Hill and the leader of the excavation.

Magness took a paintbrush and swept away the fine Mediterranean dirt.

What Magness and Bozung saw changed ancient Hebrew history's narrative and made Huqoq a place of significance in ancient Galilean archaeology.

Peering out at them was a mosaic depiction of a woman's face.

"It was almost as if she was looking up at us like, 'There you are. I've been waiting for you to find me,'" Mary Robinson-Mohr says, registrar for the Huqoq excavation.

Magness knew they had discovered something historically important. This was no longer a simple excavation. She needed more resources, more specialists and more time.

"For the first time in my life I received an email with 'mosaics 9-1-1' in the memo line," Dr. Karen Britt says, mosaics specialist for the Huqoq excavation. "When it became clear that the synagogue was paved with all these stunning floor mosaics - and that they were in a state of preservation that's really rare, not just in Israel, but the whole eastern Mediterranean - it became clear that it was going to be a much larger project than I anticipated."

There's now a laundry list of first-ever discoveries. In the eight years since uncovering that first mosaic, Huqoq has revealed the first non-biblical scene depicted in a synagogue; painted plaster columns in rare condition; and oddly-located cisterns, which were used for water storage.

And then there are the mosaics: There are scenes of Samson and the gate of Gaza; the building of the Tower of Babel; Noah's ark; the parting of the Red Sea; and the depiction of the story of Jonah, which for Huqoq meant a large fish eating a smaller fish that was eating an even smaller fish from which Jonah's flailing legs protruded.

But that first woman with her mesmerizing eyes had a Mona Lisa-like quality. She knew her impact.

When the archaeology community caught word of the mosaic pavement in the Huqoq synagogue, news media reported it, the Israel Antiquity Authority traveled to the site to see it, and National Geographic provided additional funding.

When Magness' team uncovered that first woman, with a high density of individual tiny tiles, known as tesserae, it confirmed Magness' belief. It was the first example of a fifth century synagogue that had mosaics of the same high quality as earlier, elaborate places of worship.

The dig was originally intended to last six years. It's now on its ninth and the nearly 50 students, supervisors and specialists on site are still uncovering new findings.

Shua Kisilevitz, archaeologist with the Israel Antiquities Authority and assistant director on the dig, wasn't supposed to work with Magness. She previously surveyed the site but was recommended to Magness after the original assistant director was diagnosed with cancer and couldn't continue working.

"When I came here, I thought it would be a one-year thing," Kisilevitz says. "We found the mosaics and we got very excited, of course. I met with Jodi and she looks at me and she smiles. She says I want to reserve you indefinitely. That was kind of when I knew this was turning into something much larger."

Each morning Magness sits in her plastic lawn chair with "site director" written on the back, sipping herbal tea and watching her career-defining archaeological discovery unfold. She watches a University of North Carolina student wheel a pile of dirt over there, a BYU student attempt to break a rock over here, and Britt study the latest mosaic down there.

They're all here because of her. Some of the students aren't studying archaeology. There are majors in microbiology or political science or computer science. Others are like Robinson-Mohr, who had no archaeological background but has a sharp mind and curiosity in the subject.

Magness fosters a lively environment underneath the shade tarps. When she calls students over to talk about the biblical scene just uncovered, her excitement is palpable. There are unmistakable exclamations, rapid sentences and the occasional joke.

When she's finished, she claps her hands and yells "breakfast" every morning.

On this day, it's 7:45 a.m., about three hours after the team arrived. Students happily put down their pickaxes and walk toward the bare bones sink created by the site coordinator, Miki Golan.

Clean plates, silverware and cups sit in bins next to the pot of cardamom coffee and near the table full of different types of salads. Scrambled eggs and pancakes await. The hot breakfast might be the students' favorite part of the day.

As students in dirt-smeared pants sit on reed mats on the ground, Magness and the other supervisors go over announcements for the day.

But the highly anticipated part of breakfast is story time. Magness chooses an archaeology student to tell his or her life story so that everyone in the group can get to know each other better.

"I was born at a very young age," they always start. Small cheers greet those words before the monologue begins.

Buried a few meters below them are the remnants of an ancient village that used to be filled with people. There's no way to know for sure, but Kisilevitz likes to think the fifth century Jews pulled together every penny possible to build the mosaic now being uncovered.

In the fifth century, Huqoq wasn't a particularly wealthy village. It's a couple of hills in from the Sea of Galilee and tucked away from the main traffic routes. They're the kind of people who probably wouldn't be happy to know there's a cellphone tower on the peak of their town today.

The ancient village was mentioned a couple times in Jewish texts, but not in a remarkable way. The village was probably inhabited by fishermen. The nearest town of any size was Tiberius, which was a few kilometers of dry, grassy hillside away.

"It's revolutionizing what we know about the ancient past," Britt says. "I have never worked on material as spectacular as this. I am engaging with material that I haven't seen in spaces before. And frankly, material that hasn't been seen in other synagogues before."

At one point in time, someone in Huqoq likely dedicated his life to paving mosaics. He spent countless hours collecting and cutting tesserae. Under the unforgiving sun, he fit orange tesserae into the curve of a foxtail.

Every now and then he would drink water from the natural spring beside Huqoq. Maybe he returned home to Canna or Nazareth when the sun went down. He might have come back for months and months, ignoring neck pain from constantly being bent over. He might have been paid by a devout Jewish family that budgeted intensely to have a panel paved.

Today, Elton John's "Bennie and the Jets" plays over a speaker keeping the three archaeology students in that section entertained as they dig away.

The students perk up a little bit as the rhythmic clapping of the melody floats over the synagogue. It's a needed pick-me-up because three new sections are starting to be excavated. That's another 1,600 years' worth of dirt to get through.

The synagogue itself was torn down and reconstructed in the Medieval period, eventually becoming stones to use for the next construction site. The most recent village was Palestinian, and it lasted until 1948.

"The Israeli government didn't want them to have buildings to return to," Magness says. "So, they burned them down, then bulldozed them over."

The diggers on the east side of the site have to go through those ashes first. Called "butter dirt," it's easy to tear through. But the black soil looks grimly different than the rest of the excavation dirt.

"It's even worse when you find children's toys," says one archaeology student as he dumps another pile of ash.

Everyone in this section digs in silence, in part because it's exhausting work but also because they understand the weight of this uncovering.

A Palestinian family fled, leaving behind most its belongings for a bunch of college-aged adults to scrape away. Maybe they find a shard of their favorite pottery, or dump in a bucket the sooty remains of a support beam. While not nearly as ancient as the layer they're working toward, they treat the 1940s home with the same respect.

Now that this season's excavation is complete, the entire site will be backfilled and the incredible discoveries covered with dirt.

"At the end of the day, this synagogue isn't mine to keep," Magness says. "None of those mosaics are mine. I'm here to answer research questions."

Backfilling is a responsible practice, she says. It's a way to preserve the site and protect it from thieves and looters. Soon it will be hard to tell anyone was here, at all.

Golan, the site manager, will take away the stove and tables and the refrigerators used for the kitchen storage. He will return all the shade tarps and cover up the latrine.

Because of all the interest generated from Huqoq's discoveries, Magness says the Israeli government may turn the site into a tourism destination. In the last season Magness anticipates digging it up and exposing as much as possible before turning it over to the state of Israel.

Because the last life story has been told over breakfast this summer, the topsoil will soon look just like it did nine years ago, before Bozung uncovered that first mosaic.