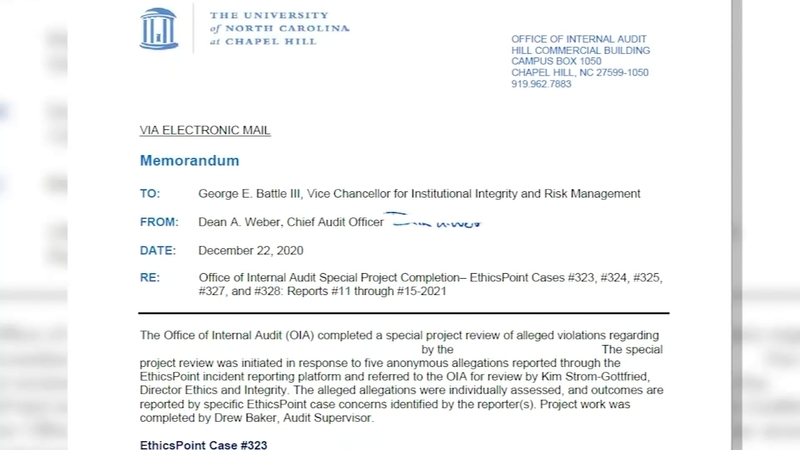 ABC11 received the audits a few weeks ago from the state's Council of Internal Audit, though they were heavily redacted.

The first audit, spurred by five anonymous complaints, alleges that a state vehicle was used to escort the UNC football team to Tallahassee, Florida, in October 2020. That's not unusual, but a "life-long friend" was allowed to ride in the vehicle and attend the game at Florida State University with credentials.

Non-state employees are not allowed to be passengers in university vehicles unless they are doing so on state-related business. Additionally, UNC police vehicles are not supposed to use their warning lights and sirens for escort services, particularly outside of UNC jurisdiction.

In a similar complaint, a state vehicle was driven to the University of Virginia football game, with a lights-and-sirens escort for the football team. Again, a "life-long friend" was in the car and was given credentials to attend the game.

Another complaint alleged that multiple purchases including a $1,000 computer monitor for home use, a custom golf cart and tactical vests "worth over 3,000 dollars that have yet to be used," had been made by the UNC Police Department.

Another complaint alleged that a departmental resource was misused for running people's personal information "that had nothing to do with departmental business."

In another complaint, a student reported her ex-boyfriend threatened her. The UNC police responded to her address in Durham, even though they did not have jurisdiction.

For all of these complaints, the audit office found that the actions conflicted with UNC policy, fiscal responsibility and ethics.

In a second audit, the complaint alleged someone circumvented UNC Police Department policies and contacted student-athletes involved in a property theft before investigators did without correctly documenting conversations. The audit was ultimately found to be unsubstantiated, but auditors noted a procedural misstep.

ABC11 requested these audits in January. After months without a response, the UNC Public Records Office closed our request last month without supplying any documents -- failing to confirm whether the records even existed.

Former UNC Police Chief David Perry resigned last month after being placed on administrative leave in May. Perry's resignation comes less than two years after he joined the university in 2019.