Undocumented immigrant who sought sanctuary in Durham church has been deported 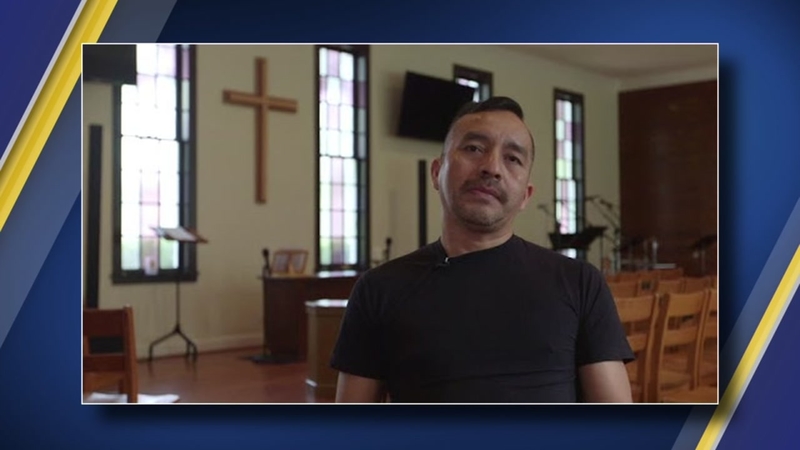 DURHAM, N.C. (WTVD) -- Undocumented immigrant Samuel Oliver-Bruno, who sought sanctuary for nearly a year in a Durham church, has been deported by U.S. Immigration and Customs Enforcement, The Associated Press reported Thursday night.

ICE spokesman Bryan Cox said that Oliver-Bruno was removed from the U.S. to Mexico at 8:45 p.m. Thursday.

Supporters of Oliver-Bruno said the Mexican national, who was detained by ICE on Friday during an appointment at the immigration office in Morrisville, had been moved from a detention center in Georgia. ICE wouldn't disclose his exact location earlier Thursday but confirmed that he was still in custody.

Advocates feared he was getting closer to being deported.
The Durham mayor, some city council members, and supporters gathered at the Durham City Hall on Thursday morning. They were asking the Department of Homeland Security Secretary to reverse Oliver-Bruno's order of removal.

"I'm not giving up hope," said Durham City Council member Javiera Caballero. "We have had other immigrants in the past here in Durham -- Wilden Acosta-was a big case a few years ago -- and we got him back and so I'm hopeful that we will get Samuel back."

"This is not right, what they did to my dad," he said.

Samuel Oliver-Bruno’s wife, Julia Perez-Pacheco, says she talked to her husband while he was at the detention center in Georgia. "I heard him very sad, desperate that they were going to move him and he didn’t know where,” she said. Oliver-Bruno was detained by ICE. #ABC11 pic.twitter.com/Zey7EJKKrz

Oliver-Bruno had been living in the U.S. for more than 20 years. ICE has repeatedly said Oliver-Bruno has no legal basis to remain in the U.S. and no outstanding appeals. ICE says he got arrested after trying to cross the border illegally in 2014 using fraudulent documents.
"Our immigration authorities are the ones that granted him stay of removal," said Cleve May, pastor of CityWell United Methodist Church in Durham, where Oliver-Bruno took sanctuary for almost a year. "They gave him a work permit. They gave him a drivers' license."

May said the 47-year-old was unable to get his work permit renewed under the new administration.

"Immigration officials at that time were the ones that granted his stay of removal because they considered the humanitarian realities of his case," May said. "They considered that he had over 20 years in this nation in Greenville, North Carolina, without a single encounter with the law."

Oliver-Bruno's wife, Julia Perez-Pacheco, who has lupus and underwent open heart surgery, wept as she sang with supporters who say Oliver-Bruno is needed to take care of his family in the United States. Perez-Pacheco said in Spanish that she talked to her husband while he was at the detention center in Georgia.