Two tractor trailers overturn on US-64 after colliding, splitting one in two 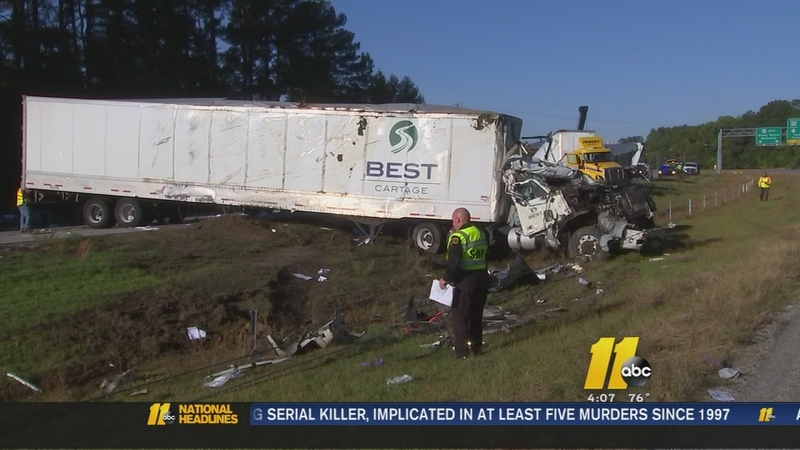 EDGECOMBE COUNTY (WTVD) -- An accident involving two tractor trailers that caused both to overturn and one to split in two, blocked part of US-64 in Edgecombe County for several hours early Wednesday morning.

Images from Chopper11 HD showed the two tractor trailers overturned along the eastbound lanes of US-64. One truck was cut into two pieces across the roadway and debris was scattered everywhere.

The North Carolina State Highway Patrol said the first truck, driven by David Plummer of Kannapolis, hit a guard rail and came to a stop on its side. The trailer was blocking all three lanes of US 64 when the second truck plowed into it.

"The driver wasn't even dazed. Because he was out of the vehicle," Princeville FD Captain Kermit Perkins said. "He actually witnessed the other vehicle crashing into his."

The driver of the second truck, 64-year-old Rodney Gilmore, suffered a broken arm and some lacerations in the crash. He was taken to Pitt Memorial Hospital. Troopers told ABC11 he drives for the Best Asset Group, based in Kernersville, which also owns the truck involved in the accident.

One man's in the hospital after early a.m. 2 truck crash in Edgecombe Co. No fuel's spilled, just paper & cardboard. pic.twitter.com/iuiGTUNJoJ

Troopers said the cable barrier in the median of the roadway helped to keep the damaged truck on only one side of the highway.

"All the diesel fuel in both trucks stayed in the tanks," Perkins said. "A little bit of oil spilled from the rig above, but other than that we have a whole bunch of paper on the scene."

He told ABC11 "no comment" when approached for his side of this story.

Crews took several hours moving the wreckage away, and getting the spilled office supplies off the highway.

"No fatalities," Perkins said. "I always think that when I come to an accident, hoping that everybody's still alive. And that was the case when we got here. You can get another truck, you can get more paper supplies but you can't get another life."