With 80% at least partially vaccinated, Orange County ranks first in the state 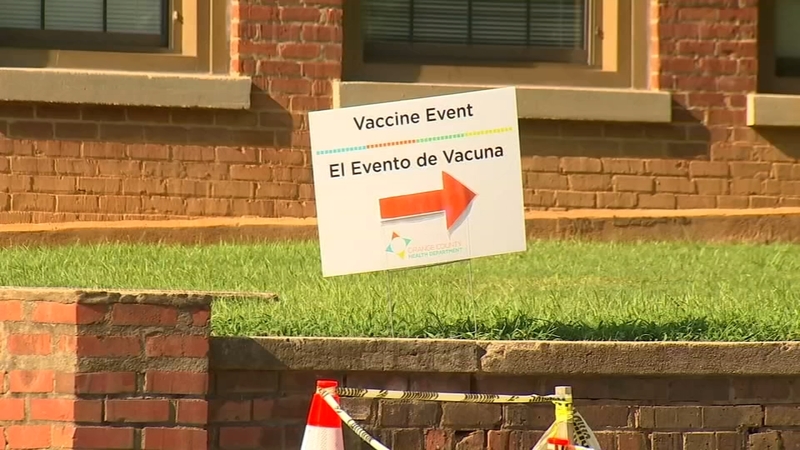 At 80%, Orange County leads the state in vaccination rate

ORANGE COUNTY, N.C. (WTVD) -- Eighty percent of the population in Orange County is at least partially vaccinated -- the highest in the state.

A resident who spoke with ABC11 on Monday was pleased with the news.

"Thumbs up for Orange County, and I wish Durham County and every other county will get on board so we can get this done to save lives," Deborah Brown said.

Brown got the Pfizer vaccine, which is officially now FDA-approved, back in February.

"At first I was in denial. I didn't want to take it but then I realized as family members started to die, people were getting infected, not because of things they did but because somebody else brought it to them," Brown said.

The county said community outreach has helped drive its numbers for equal vaccine distribution among races.

"We're very proud. We've very excited about that. We've put a lot of effort in trying to make people aware of the benefits of the vaccine. Trying to get the vaccine out to people," said Todd McGee, who handles community relations for the county. McGee said the county's racial equity task force was instrumental in targeting vulnerable populations.

People vaccinated with at least 1 dose:


Wake County comes in third place statewide with 64 percent of the population receiving its first dose.

Harnett and Robeson counties are at the bottom at 34 percent and 34.2 percent.

"We smoke more. We have less exercise. Our diet is bad. It's kind of counterintuitive," said Robeson County Health Director Bill Smith.

Despite their best efforts to get out in the community, Smith said poverty and poor health choices add to the county's challenges in getting people vaccinated.

People vaccinated with at least 1 dose in Robeson County:


But Smith said the vaccination rate is slowly improving.

"The fact that we've had 25 deaths in the last two weeks of 20- to 30-year-old people-all of a sudden, our clinics have picked up tenfold," said Smith.

Robeson County had 1,000 new cases in just the past few days, Smith said. Its positivity rate is 15 percent.

In Warren County, the vaccination rate falls in the middle statewide, with 48.6 percent of the population receiving its first dose. School leaders would like to see that number improve with the school year starting this week.

"We may look at how to incentivize those within the district employees and students and working with the health department in providing more sites," said Keith Sutton, Interim Superintendent of Warren County Schools.

Brown is hoping more people like her who were on the fence will get vaccinated.