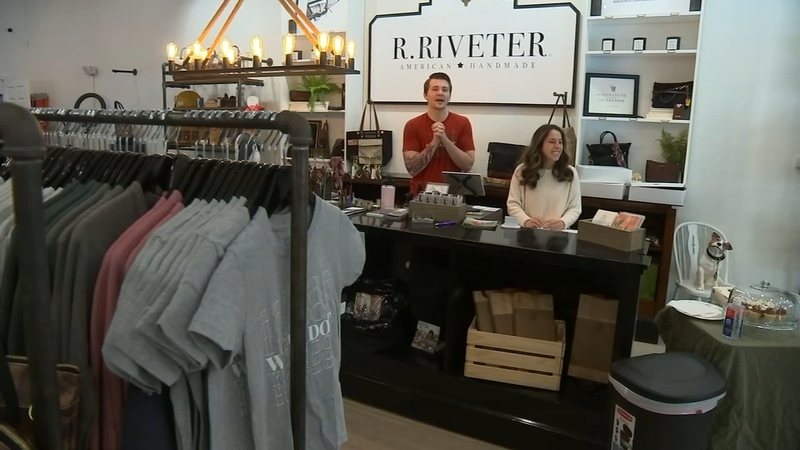 This Veterans Day, a Southern Pines company built to support military families celebrated its 10th anniversary with discounts and deals.

R. Riveter in Southern Pines, founded by military spouses Lisa Bradley and Cameron Cruse employs other military spouses across the country, each playing a role in crafting a variety of American made handbags.

"These women who we call remote riveters, they don't have to find new jobs every single time the military moves them because we send them what they need in order to make their pieces," said Rachel Schalin, R. Riveter Asst. Store Manager.

Every handbag has a name, the design inspired by a women who made her mark on military history.

One of them, the Otto, is named for Elinor Otto, one of the original Rosie the Riveters who recently turned 102 years old.

"In World War II all these women, they didn't have their spouses and so they said we're going to get it done and they went to work and they built this really great legacy for all of us down the line," said Schalin.

The company, featured on ABC's Shark Tank, landed a deal with investor Mark Cuban in 2016.

Through R. Riveter's Heirloom Program, families can send any item from any era and have it handcrafted into a custom made handbag.

"It's a really good way to remember them, hold them with you rather than just shove it in your closet while it collects dust," said Ian Smith, store manager.

Everything from flak jackets to duffle bags are turned into a bag, an heirloom from your veteran, you can carry with you.
Report a correction or typo
Related topics:
societysouthern pinesveterans daymilitaryveteran
Copyright © 2021 WTVD-TV. All Rights Reserved.
TOP STORIES
NC Supreme Court ruling moves state's primary from March to May
Donate to the ABC11 Together Food Drive
Raleigh City Council approves the use of tiny homes
Crime, affordable housing top priorities for Durham's new mayor
Push to boost as NC first Omicron case could be 'week or so' away
Officials promise more subsidies, urge signups on Healthcare.gov
Show More
21-year-old becomes youngest person in NC to serve in public office
Map used by Rep. Madison Cawthorn is a possible ethics violation
Supersonic jet maker may be coming to North Carolina
Cumberland County Schools welcoming feedback from military families
LATEST: US COVID-19 daily death average surges
More TOP STORIES News