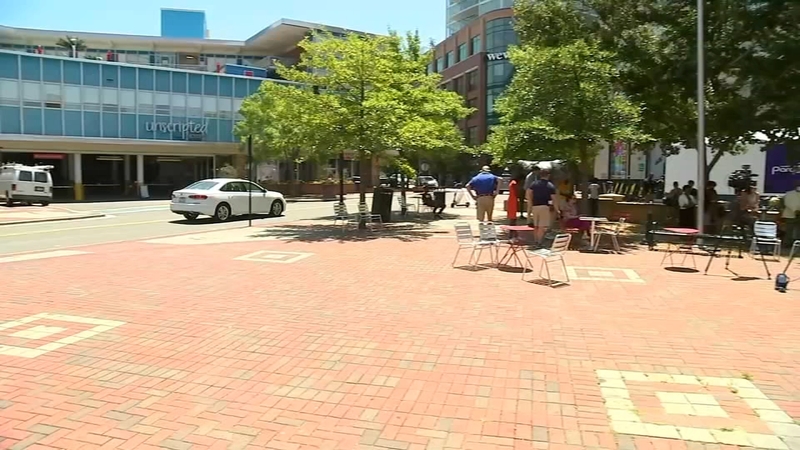 "What shall we do? The spilling of our blood is no casual matter. It requires a response. And we gather here today, at high noon, in the hottest part of the day, in the center of our city all the elders present, to say that this is no casual matter to us. This is of utmost importance. This is issue number one," said Mayor Pro-Tem Mark-Anthony Middleton.

Police Chief Patrice Andrews made a point to couch her statements not solely from her official role, but as a mother.

"If you've never been to a situation where a young black man has just taken his last breath, then don't talk to me about anything other than solving the gun violence in this community," said Andrews, who shared conversations she's had with members of her family about gun violence.

In the first quarter of 2022, there were 11 homicides in Durham compared to seven homicides in 2021 and 2020, respectively. Overall, violent crime increased by 8%, though aggravated assaults, burglaries, and larcenies decreased. Last month, Andrews addressed City Council, and shared steps the department is taking to fill vacancies.

Elsewhere, Brenda Howerton, the Chair of the Durham County Board of Commissioners, pledged greater funding for mental health resources.

"There should be more gun locks so that adults who have guns in the homes, lock them up, so that the kids can't get them. We can't keep doing this. How many more children do we have to see dead," asked Howerton.

Howerton lost two sons in separate shootings in the 1990's; one case was a police-involved shooting in which the officers were legally cleared of wrongdoing, though there were questions from some within the community about how the initial call was handled.

"I also unfortunately have a close friend whose four year old niece accidentally shot herself and died at four years old. So I'm also advocating for safe storage in the home. The Governor has proposed a million dollars for safe storage and gun locks. That is a very, very easy item that we should get in the budget this summer," Murdock said.

She recently proposed creating safe zones around schools and day cares to prevent the opening of any new schools. Friday, Murdock shared her reaction to a bipartisan gun legislation agreement in the Senate.

"We will take what we can get and it's not perfect. But if this new legislation and this new work, even if it saves a fraction of lives, it is worth it. And so if they are coming to table after 30 long years, we will meet them where they are, is what I consider our US senators to do," said Murdock.

According to the non-profit Gun Violence Archive, as of Wednesday, there have been more than 20,000 shooting deaths in the United States so far in 2022, with about 55% of those being suicides. Of the total deaths, there have been 767 children (17 years old or younger) who have been killed, and 269 mass shootings.