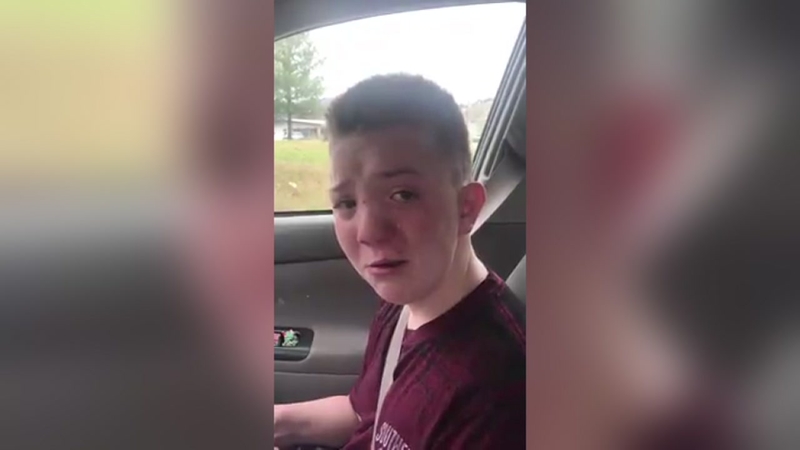 It's a video that has touched millions of people and has given Keaton Jones new friends all across the world.

The young boy has helped start a much needed conversation about bullying and what is needed to remove it from society.

Keaton's mother, Kimberly Jones, posted the video on Facebook -- which has now been viewed by more than 20 million people. In the video, Keaton told his mom that kids make fun of his appearance, pour milk on him and put ham down his clothes.

He also said he's not the only victim of bullying at his school.

"It's not okay," he said, with tears coming down his face. "People that are different don't need to be criticized about it."

A number of people across the world have stepped up to offer support for Keaton, including Donald Trump Jr., Chris Evans, Snoop Dogg, Cardi B, UFC, Katy Perry, Ryan Seacrest and ESPN's Jemele Hill.

This boy is incredibly brave and the video really got to me. @danawhite, If he takes you up on your offer to see UFC Headquarters, I would be honored to host him and his family at our place if they need somewhere to stay. https://t.co/EWx05o0yI0

Tennessee Titans player Delanie Walker invited Keaton and his family to a game on Dec. 31.

@DonteStallworth @Lakyn_Jones hopefully my video and the tweets that Keaton have been getting brings awareness to bullying and how serious it is in our school system pic.twitter.com/1Dujv3RxA5

Katy Perry also tweeted, "This broke my (heart) today. Please be kind to one another."

This broke my 💔 today. Please be kind to one another. #standwithkeaton https://t.co/8XBbFmnuc1

Players from University of Tennessee's football team will attend Keaton's school next Tuesday to offer support.

Chris Evans also invited Keaton and his mom to the "Avengers" premiere in Los Angeles next year.

Stay strong, Keaton. Don’t let them make you turn cold. I promise it gets better. While those punks at your school are deciding what kind of people they want to be in this world, how would you and your mom like to come to the Avengers premiere in LA next year? https://t.co/s1QwCQ3toi

#KeatonJones, your curiosity and kindness will overcome this moment and bring you many better days to come. #StandWithKeaton https://t.co/8t4ojKLs72

So I got the chance to spend the day with my new best bud Keaton. It was unbelievable to get to know him and realize that we have a lot in common. This dude is very special and has changed my life forever. Now I have the little brother I always wanted! God bless you my man pic.twitter.com/vMHVtnf2rC

Hey Keaton, unfortunately you aren't alone. A lot of kids are bullied, but they will be so uplifted by your courage. You're a hero, young man. You are treasured and valued. Let me know if you'd ever like to visit ESPN. You can be my special guest. https://t.co/N8mkUTYnEy