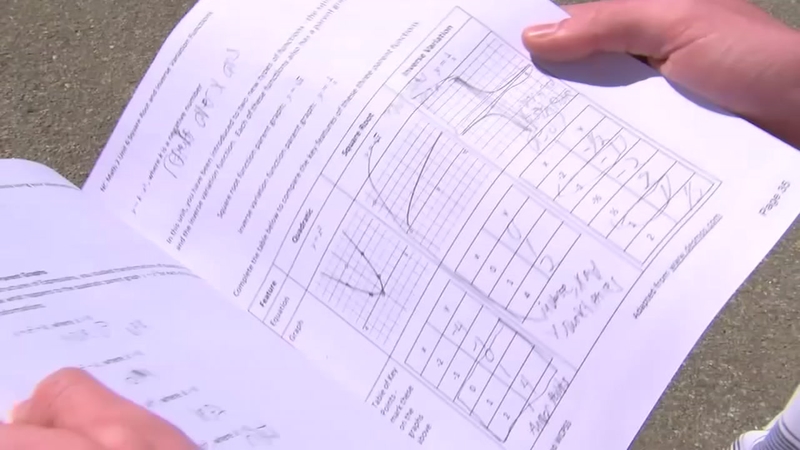 WAKE COUNTY, N.C. (WTVD) -- When Wake County Schools said it would investigate parents concerns over the district's controversial new MVP math curriculum, the review committee was given a two-fold purpose: to respond to parent complaints and seek objective feedback.

"They think it's over but it's not," said Karen Carter, a mother of son and daughter enrolled at Green Hope High School in Cary.
Carter is pledging to keep fighting the MVP program.

She spoke to ABC11 not long after the closed-door meeting with WCPSS officials about the District's 17-page curriculum review committee report about the contentious math curriculum that Carter says sent her 14-year-old's math grades into the tank.

"The math has been terrible," Carter said. "She's really not learned anything."

“They think it’s over but it’s not.”
• • •#WCPSS parents got an early peek at the special committee review of the District’s controversial new math program. Parents did not like what they saw. #abc11 #nced #MVPmath pic.twitter.com/6zBIYLE6Ap

District leaders spent an hour on Monday explaining their findings about MVP to the parents who lodged the formal complaint - presenting what Carter described as a mountain of evidence in defense of the new math that was implemented two years ago as a better way of getting students to understand and explain their answers rather than just replicating a memorized formula.

"My opinion's not changed," Carter said regarding the private session with District officials who told parents the committee is recommending more professional learning for teachers and adjustments to the implementation of MVP.

"I'm really just asking that Wake County be honest. This is not the first time we've heard they're gonna make improvements," Carter said.
A small army of Wake County parents has told ABC11 similar math horror stories this past school year. But, in its committee review, the District aims to explain the reason for the curriculum switch.

The committee, made up of Wake administrators and teachers, examined 10 alleged violations to board policies or state law. They found no rules or laws were broken.

Carter and the other parents believe the committee is biased.

"It was evident that (WCPSS) handpicked, selected people that that would give them exactly what they wanted," Carter said. "They can keep bringing it back and as long as they understand we're going to keep showing up. Because it's not over."

On Tuesday evening, the committee will unveil its findings to the public at the school board meeting.