Students encouraged to use personal electronic devices in school? 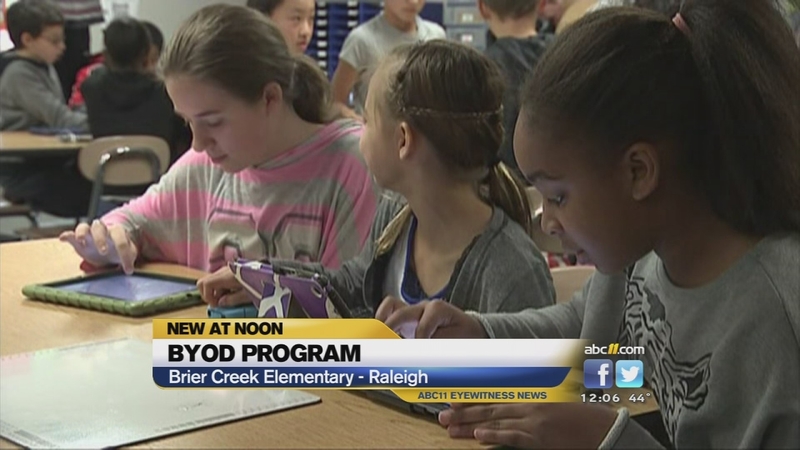 Students encouraged to use personal electronic devices in school?

RALEIGH (WTVD) -- Personal devices once considered against the rules, are now being embraced and encouraged in the classroom.

Wake County Public Schools is rolling out the Bring Your Own Device, or BYOD, in 13 pilot schools this winter.

Brier Creek Elementary is the first elementary school in the pilot program to test the policy that allows all students who have personal devices -- such as smartphones, tablets, and laptops -- to bring them to school for classroom use.

"As we jumped into it, it went a lot easier than expected," said Anna Hayes, Brier Creek fifth grade math and science teacher. "The kids love it!"

Hayes said since beginning the trial run a week ago, she's witnessed a change in her classroom's environment.

"I feel like the kids are more engaged," she said

WCPSS administrators said measuring success of the BYOD program will come down to whether they see higher student engagement.

Marlo Gaddis, Wake County's Senior Director of Instructional Technology and Library Media Services, said BYOD is a concept already adopted in more than half of the nation's school systems.

"We're not new to the game. We just wanted to make that when we did it, we were really careful about how we were doing our implantation," said Gaddis.

Not every child in Wake County has their own device to bring to class, so schools are leveling the playing field by providing tablets and phones to those students. Teachers also have students work in groups so they take turns using the device.

"Where the device is just a tool, it's not the be all and end all of instruction," Gaddis explained.

Especially in middle and high school where students already bring their own devices regardless of policy, they're now able to use them openly within set guidelines.

"Even though they're doing the same type thing it's amazing how them just doing it on a device makes them that just more excited," said Hayes.

WCPSS will rollout BYOD at pilot schools and test the program for a couple of months. Teachers and staff will take surveys and evaluate how effective BYOD was and let the Board of Education decide from there whether every school should adopt it as new policy.